The number of people killed by sharks in the last year has been quartered, but are they attacking any less? 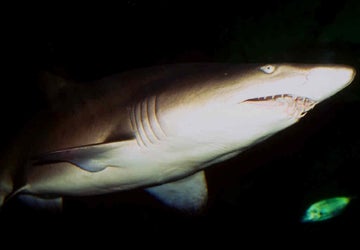 George Burgess, the director of the International Shark Attack File at the University of Florida, announced today that fatal attacks from the toothy predators dropped to a two-decade low worldwide. Only a single swimmer was lost in 2007, compared to four each in the two years before. Granted, that doesn’t mean sharks are leaving us alone completely. The number of attacks actually increased from 2006 to 2007, jumping from 63 to 71.

More than half of these occurred in US or Hawaiian waters.

As for why the number of fatal strike dropped, Burgess suspects this is the result of improved medical treatments and better swimmer awareness. For more information, check out the International Shark Attack File here.