An astonishing look at some of the universe's most violent events: supernovae, gamma-ray bursts, collisions between galaxies and more 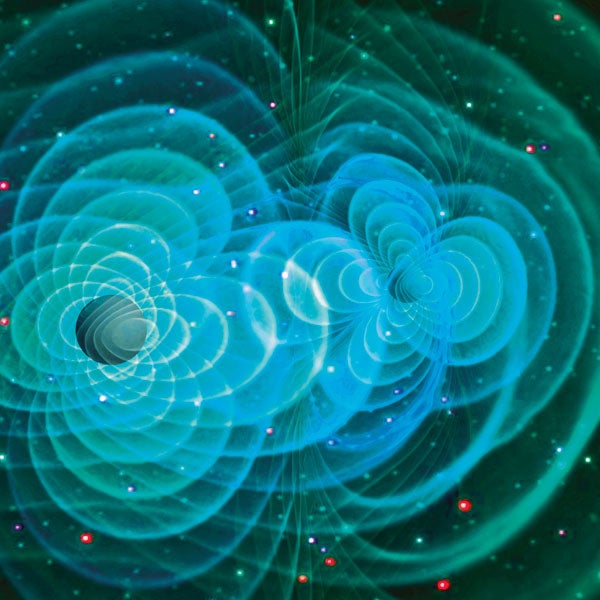 Nothing in the universe is more violent than the colli­sion of two black holes. At that instant, the impact releases more energy than every star in the universe combined. It also creates ripples in spacetime that travel at the speed of light, known as gravitational waves. Though invisible, they appear as blue lines in this image created by a NASA supercomputer.
SHARE

Enormous supernova explosions, gamma-ray bursts from distant galaxies, the violent birth of stars, and the incredible consequences of collisions between galaxies or black holes: These are some of the most extreme and mysterious events in the universe, yet our largest telescopes and satellites glimpse only their dim afterglow.

That’s why astronomers use the world’s largest supercomputers to transform theories and formulas into animated 3-D simulations of explosions, collapses and collisions.

The computer simulations help astronomers verify their theories—and they provide us with this gallery of phenomonal images.

This article was originally published in the inaugural issue of Science Illustrated_, a recently launched sister publication of_ Popular Science_. Like what you see? Subscribe today at_ scienceillustrated.com.

Nothing in the universe is more violent than the colli­sion of two black holes. At that instant, the impact releases more energy than every star in the universe combined. It also creates ripples in spacetime that travel at the speed of light, known as gravitational waves. Though invisible, they appear as blue lines in this image created by a NASA supercomputer. 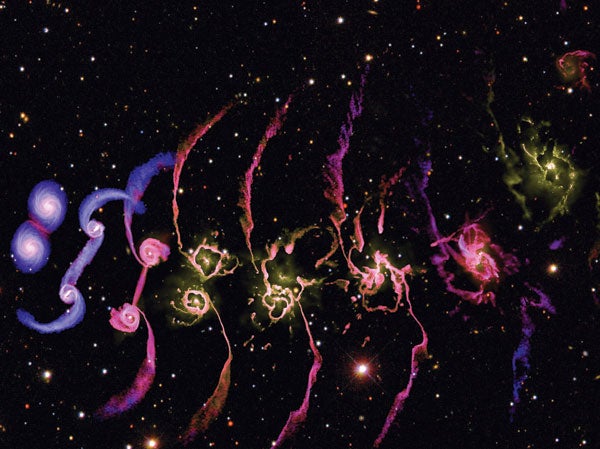 Galaxies Smash into Each Other

Here we watch as two spiral galaxies collide and create a third galaxy with a huge black hole at its center. The hole grows and grows until, with its enormous energy, it heats surrounding gases and hurls them out into the universe. The result [right] is an elliptical galaxy with very little gas and not much star creation. Researchers at the Max Planck Institute for Astrophysics illustrated this simulation using red to show the hottest gases and blue for the coldest. The brighter the color, the denser the gas. 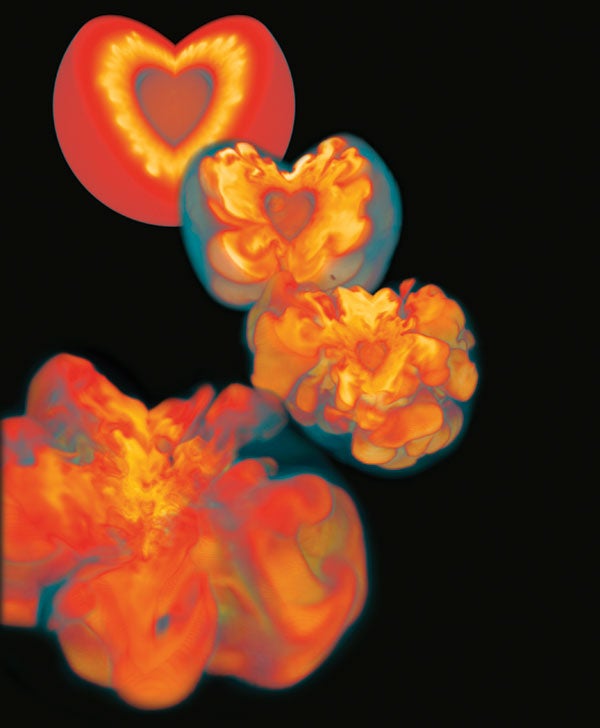 A Star Burns Out

When a giant star runs short of fuel, its core collapses. That sets in motion a shock wave that ejects the outermost layer in a massive explosion called a super­nova. A compact neutron star is all that’s left behind. This 3-D simulation was made by Konstantinos Kifonidis and Leonhard Scheck of the Max Planck Institute for Astrophysics. It shows the dis­tribution of heat in an enormous star just milliseconds after its core collapses. Supernovae spread matter that can later create new stars and planets. 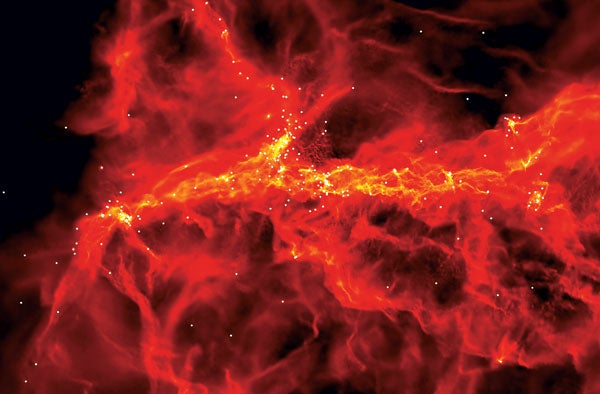 How is something as tangible and visible as a planet, a star or an entire galaxy born out of a wispy cloud of gas? Matthew Bate of the University of Exeter in England has explored this question with the help of the supercomputer at the U.K. Astrophysical Fluids Facility at the University of Leicester. With it, he has created the most complex simulation of star forma­tion ever undertaken. These images, from that simulation, start with a cloud of interstellar gases measuring 2.6 light-years across. This cloud has a mass 500 times that of the sun. Eventually, the cloud collapses under its own gravity, creating a system with 91 stars and many brown dwarves [both visible below as white dots]. Brown dwarfs are low-mass objects in which the pressure and temperature in the core is too low to start nuclear reactions. That is why they only glow weakly. This simulation shows how newborn stars compete for gas. The larger stars greedily suck up more gas, while weaker objects are thrown out of the system and must live as brown dwarves far from the stellar mass. This simulation supports a new theory that galaxies have far more brown dwarves that was earlier believed.

Birth of a Star

0 YEARS: A massive cloud of interstellar gas just before it collapses under its own weight. 38,000 YEARS: Dust and gas begin to fragment. 152,000 YEARS: The first concentrations of gas that will become stars. 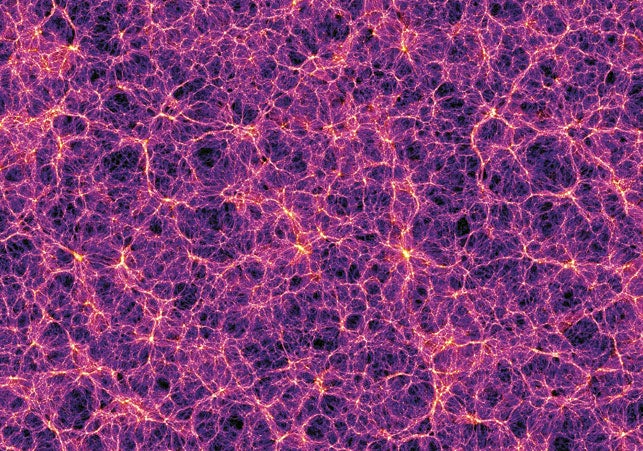 The universe is filled with matter—not just what we can see, in the form of stars, planets, comets and other visible objects, but also dark matter, which can’t be seen because it emits no radiation. According to cosmological theory, soon after the big bang, cold dark matter formed the first large structures in the universe, which then collapsed under their own weight to form vast halos. In the regions where the gas concentra­tions were high enough, stars and galax­ies formed. Aside from general consensus that it has to be there, we do not know much about dark matter, but by measur­ing the movements of visible objects, we can see its effects. (The gravitational pull of dark matter affects all objects in the universe today.) With the so-called Millennium Simulation, running on the supercomputer at the Max Planck Institute for Astrophysics in Garching, Germany, scientists were able to create these images of dark matter’s expansion into the local universe. The large image is 3.3 billion light-years across and shows dark matter in pink and gas in yellow. 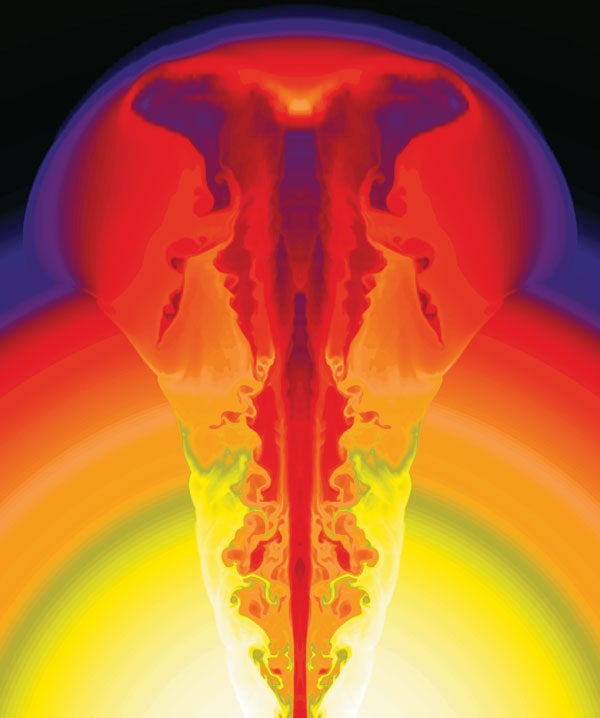 Gamma-Ray Bursts Blow Everything Else Away

The universe’s most powerful explosions are, without parallel, those of gamma-ray bursts. A single such burst releases as much energy as a ten million billion suns. Short gamma-ray bursts lasting only a fraction of a second occur when two neutron stars or black holes collide. Long gamma-ray bursts of more than two seconds happen in connection with very powerful supernovae. This picture shows a long gamma-ray burst—in the form of a jet of gamma radiation—10 seconds after it was ejected by a heavy star that collapsed into a supernova. The image was created by a supercomputer at Lawrence Berkeley National Labora­tory. The blue, red and yellow colors represent gamma-ray density, with blue the lowest and yellow the highest.

A simulation of a short gamma-ray burst. Two neutron stars meet and circle around and around each other until they collide. Gamma-ray bursts arise when neutron stars collide in a gigantic explosion that releases powerful radiation in a few milliseconds.
science illustrated
supercomputers