Blacker Than Black Nanotubes are the New Black

The military shows interest in a new material that's 30 times as dark as the current standard—but it's good for solar panels too! 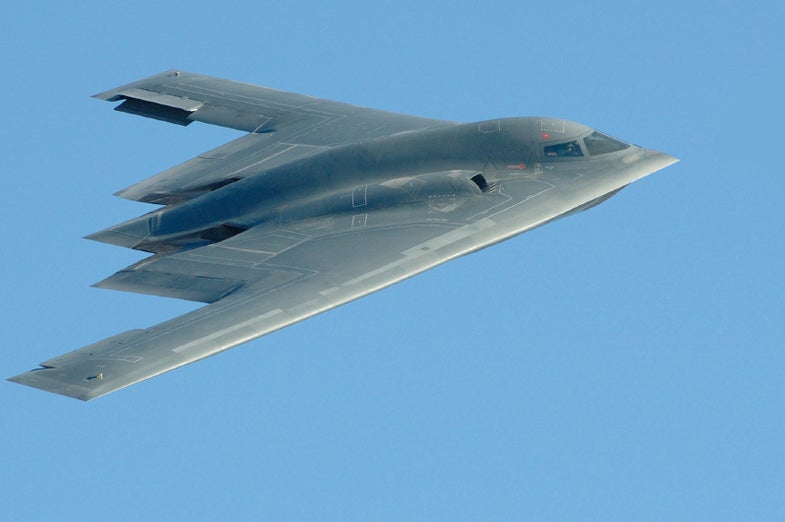 We told you about a new ultra-black material back in January and guess who was the first group to come knocking on the researchers’ door? The military. It seems military officials are interested in the super-black stuff to help make radar-shedding B-2 stealth bombers even more difficult to spot. To refresh your memory, the new black, created by scientists at Rensselaer Polytechnic Institute in New York, traps about 99.995 percent of light that hits it–about 30 times as black as the current standard for blackness.

The stuff is made of carbon nanotubes with walls just an atom thick. The trick is to space the tubes widely, which allows ample space for light to enter, but, because the tubes are so small, very few surfaces to bounce the light back out. The current standard for black–set by the National Institute of Standards and Technology–reflects about 1.4 percent of incoming light. The new stuff reflects just 0.045 percent.

However, project leader Shawn Yu-Lin is quick to point out that the new black has plenty of potential applications. It could boost the efficiency of today’s solar panels, which are coated with conventional black paint that reflects more than five percent of incoming light. Or a telescope barrel lined with the material could absorb specks of scattered light to provide a darker background against which to spot faint, distant stars. And let’s not forget about 007’s tux.