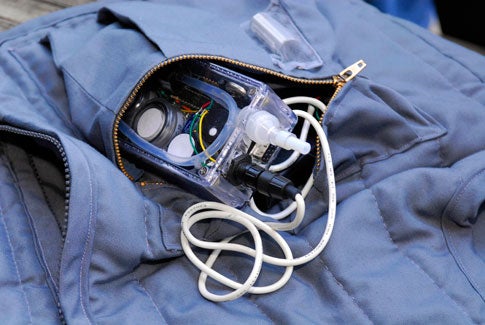 They won’t win any fashion contests, but the asthma victims taking part in a new study at the Georgia Tech Research Institute could help scientists learn more about the environmental triggers of wheezing attacks.

The battery-powered system, contained in a vest, samples the air for levels of formaldehyde, carbon dioxide, ozone, nitrogen dioxide, relative humidity and more. It also filters the air, and collects samples for lab analysis. The goal of the study is to look for linkages between environmental conditions and the onset of wheezing. It has already helped one participant, as the team discovered that this person had high levels of volatile organic compounds at home–automobile exhaust and gasoline fumes were reportedly seeping in. The vest has been tested in an adult population, and the scientists hope to study children next.