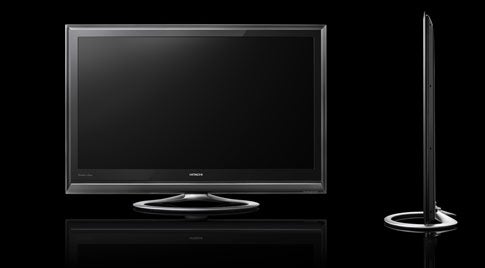 Hitachi claims that image quality on its slim TVs will be the same as on its standard models.

Your standard LCD may be svelte compared with the old tube set, but at about four inches thick, it hardly hangs flat like a picture frame. For that, you need Hitachi’s new Ultra Slim TV, redesigned to a negligible 1.5 inches thick but up to 42 inches diagonally. In principle, Ultra Slim models work the same as standard LCDs: Fluorescent tubes illuminate a liquid-crystal display from behind. Hitachi’s innovation is a new diffuser–a sheet containing tiny lenses–that can project the backlight evenly across the screen even as it sits flush against the light source. Other sets require some clearance for the light to spread out.

For additional slimming, Hitachi consolidated electrical components. For example, it combined functions from several chips into one. The company also developed a power supply that is one third the thickness of the transformers in its regular LCDs.

Hitachi was the first to compress the LCD, but it’s not alone. In January, JVC announced a 1.5-inch model using similar technology, and LG introduced a 1.7-inch-thick panel. (Sony’s OLED TV is thinner than any of these, at three millimeters, but the screen on the current version measures only 11 inches diagonally.)
It seems flat-panel TVs, like the actors who grace their screens, can never be
too thin.

Read updated coverage of the thinnest LCDs, live from CES.