Bacterial DNA could store 1,000 copies of War and Peace on the head of a pin 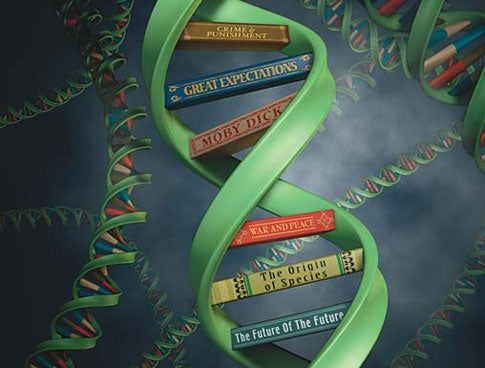 by Sharon and Joel Harris

Eternal Classics: Encoded in DNA, the great books could survive for a million years.

High-definition movie files can decimate the free space on your computer, but scientists are working to turn bacteria into a hard drive with nearly infinite capacity. This past spring, a group led by scientists at Keio University’s Institute for Advanced Biosciences at the Shonan Fujisawa campus near Tokyo announced that they had inscribed the phrase “E=MC² 1905!” onto bacterial DNA as a tribute to Albert Einstein. More than just parchment for simple messages, bacteria have the potential for massive data storage. In fact, a single bacterium could store more than 400 copies of this article.

The scientists demonstrated the technology by converting the tribute phrase into binary code and then into a specific sequence of DNA nucleotides, which they spliced into the bacteria’s genome. To keep the data intact, the researchers used Bacillus subtilis, a species that has very slow mutation rates and resists most viruses. They also inserted their message into several spots of the genome as backups within the backup.

The potential uses for this type of organic hard drive go far beyond data storage. Project adviser Yoshiaki Ohashi says that pharmaceutical companies could “stamp” their drugs to thwart counterfeiters, or spies could carry bacteria encoded with confidential information in tiny vials.

The team only recently applied for a patent, so it could be several years before you start having to worry about antibacterial soap accidentally wiping out your hard drive.