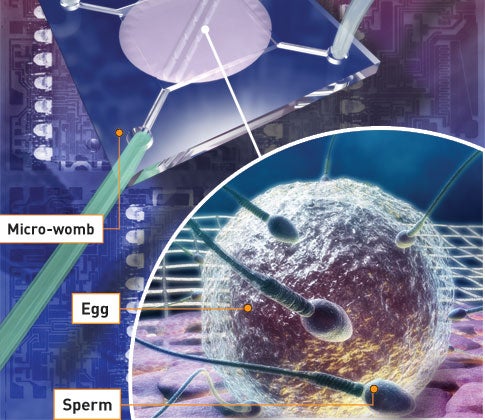 Since the 1978 birth of Louise Brown, the first test-tube baby, in-vitro fertilization (IVF) has produced approximately three million infants worldwide. Although success rates continually improve, the science of making babies in the lab is still hit-or-miss. The Centers for Disease Control and Prevention report that less than 29 percent of IVF attempts result in the successful birth of a child.

Those rates could soon soar, thanks to an innovation by fertility researchers at the University of Tokyo. Teruo Fujii and his colleagues have invented a plastic chip-like incubator that nurtures early embryos like a real womb does. Currently, IVF eggs mature while resting on the floor of a petri dish, a very unwomb-like environment. “We wanted to culture embryos in an environment that is closer to what happens inside the body,” Fujii says.

The team’s research began with mice, but in March, they graduated to human embryos. While they have yet to implant any of the human embryos, results from the rodent experiments are promising: The team has successfully incubated up to 88 percent of early embryos.

The ultimate goal, Fujii says, is to perfect an artificial micro-uterus that fuses egg and sperm-and easily produces healthy, ready-to-implant human embryos. Such a device could benefit many of the estimated 1.2 million women who visit fertility doctors every year.

To set up the pivotal mouse experiment, Fujii and his team carefully placed 10 mouse eggs, one by one, inside a “cage” on the top floor of a two-tiered silicone microchip. Uterine cells plucked from a donor mouse line the bottom of the cage. Next they added sperm cells, which fertilized some of the eggs, and watched as the “womb on a chip” became home to the rapidly dividing embryos over the next 48 to 72 hours. The embryos that reach about 100 cells are implanted into real mouse moms to gestate.

The natural womb provides a perfect cocktail of fluids. Inside the fallopian tubes and the uterus, cells release chemicals tailored to the changing needs of a growing embryo, delivering the amino acids, proteins and growth factors that help the embryo develop. But a petri dish lacks these complex cellular interactions.

The chip functions a bit like a gentle car wash, using pumps to periodically bathe the cells in the fluid needed to keep them alive. It can be programmed to infuse its contents with as little as one trillionth of a liter of liquid and employs tiny chambers to contain the eggs and prevent nutrients from becoming too diluted.

Another benefit of the chip is that there’s less stress to an embryo when it’s not sucked into a pipette, which can cause physical damage or fatal changes in pH or temperature-downsides to life in a test tube.

The use of microchips creates a new paradigm, where artificial wombs mimic the small-scale environment in the fallopian tubes, says Matt Wheeler, a reproductive biologist at the University of Illinois who is developing automated IVF systems.

Beyond making babies, the devices could also be used to grow genetically modified animals and stem cells, and might someday help grow implantable organs. Fujii is quick to note, however, that fertility treatment is still an invasive, psychologically challenging procedure and that it could take upward of five years for the technology to reach clinics. To perfect the device, the researchers must first gain a better understanding of exactly what happens inside the body, what an embryo needs, and in what sequence-in other words, how mom does it.