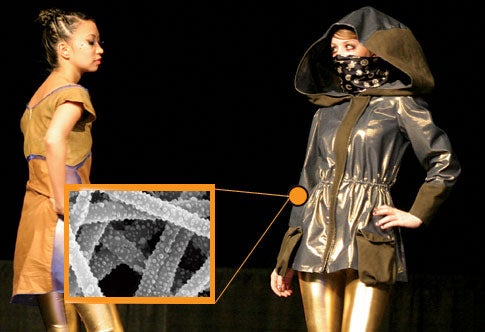 The approach of flu season sends many people scurrying for vaccinations and vitamins. But what if you could avoid the flu and other viruses simply by getting dressed? That´s the idea behind two garments that are part of the “Glitterati” clothing line designed by Olivia Ong, a senior design major at Cornell University. The two-tone gold dress and metallic jacket made their debut at the Cornell Design League fashion show on April 21.

It´s not the casually stylish appearance of the dress and jacket that has attracted attention from clothing manufacturers, tech blogs and even military research labs, but rather something that can´t be seen: a sprinkling of nanoparticles intended to protect the wearers of these garments from invisible threats to their health. The upper part of the dress is made from cotton coated with silver nanoparticles that deactivate bacteria and viruses. The jacket´s hood, sleeves and pockets contain palladium nanoparticles that act like tiny catalytic converters to break down harmful components of air pollution.

The dress and jacket are known as “functional clothing”–garments that do more than just make you look cool–and they are growing in popularity. Already on the market are shirts with bug repellent, antimicrobial underwear and stain-resistant trousers. But Ong´s creations are among the first to qualify as genuine nanotextiles, fabrics in which the active particles are evenly distributed and less than 100 nanometers in diameter, or about one thousandth the thickness of cotton fibers.

To create the nanotextiles, Ong turned to Juan Hinestroza, an assistant professor of fiber science at Cornell. He and postdoctoral researcher Hong Dong dipped positively charged cotton fabric in a solution of negatively charged metal ions. Electrostatic forces bind the metal ions and cotton together. The smaller the metal particles are, the greater the surface area for interactions with microbes or smog in the atmosphere.

The beauty of nanotextiles is that the particles are so small that the clothing feels and drapes like your favorite cotton T-shirt. The nanoparticles also block larger dirt particles from reaching the surface of the cotton, so the garments don´t often need to be washed. “And if you create colors with particles instead of pigments,” Hinestroza points out, “your clothing will never fade.”

The difficulty lies in figuring out how to control the particle dispersal with nanoscale precision. Currently, only scientists using pricey microscopes can even see the nanoparticles well enough to measure them. That´s one reason it´s difficult to verify commercial claims about “nanotech” clothing.

Because making the fabric swatches for Ong´s dress and jacket cost about $10,000, germ-busting clothes aren´t likely to be mass-produced anytime soon. But already researchers can see potential markets ranging from well-heeled hypochondriacs to medical emergency teams.

The U.S. Army is especially interested. Scientists at the Natick Soldier Research, Development and Engineering Center in Massachusetts are experimenting with metal nanoparticles and chlorine coatings in an effort to create protective suits that will provide a barrier against chemical and biological weapons. In addition to ensuring that “self-cleaning” fabrics are safe and non-irritating, the Army scientists must also perform long-term wear tests to make sure that the fabrics hold up with repeated wearing. The hope is that these fabrics will be lighter and thinner than conventional barrier materials, but some of the most promising compounds are probably too expensive for widespread use. “We´re not putting gold into soldiers´ uniforms,” says Heidi L. Schreuder-Gibson, a polymer research chemist at Natick, “but we might go with silver.”