A new trick for viewing brain cells--without a scalpel 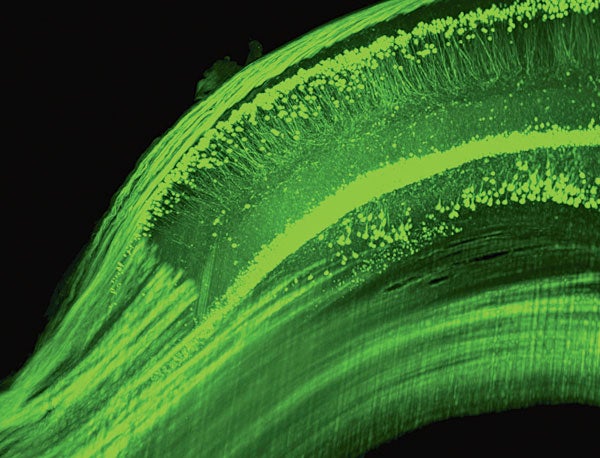 Physicist Hans-Ulrich Dodt, a visiting professor at the Max Planck Institute in Germany, has figured out how to see nerve cells deep in mice brains as clearly as little neon motel signs. His technique could advance research on Alzheimer’s disease by quickly showing how new drugs affect nerve degeneration in rodent brains. It could also make three-dimensional fly-through animations of the brain possible for the first time, Dodt says.

To see deeper than a millimeter inside a brain, scientists currently have to slice it into hundreds of thin sections and reconstruct the distorted neurons in 3-D on a computer. Dodt’s solution is to first render the whole brain transparent by immersing it in an oily solution that prevents any light-scattering that might cloud the image. Then he slices with light instead of a knife, shining a laser on the tissue, which has been genetically engineered to fluoresce. Observed under a microscope, the result is a stunning 3-D view of neurons. “The technique could scale up considerably,” says Dodt, who teaches full-time at the Vienna University of Technology. Next he’ll try higher-resolution cameras, among other tweaks, to see all of the organs inside a mouse embryo.