Want to pay $10 for your flight and $15 for your pillow? Bill Diffenderffer has the airline for you 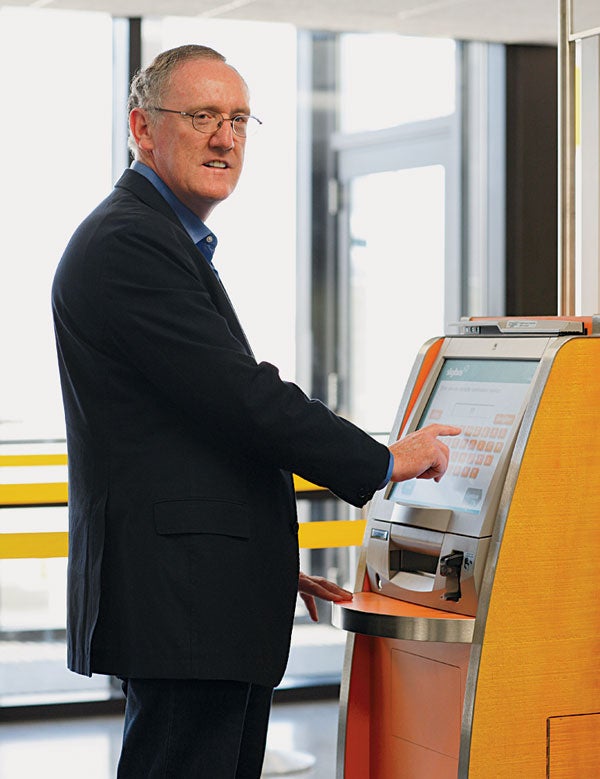 If Skybus Airlines is the future of air travel, then the future won’t cost much. Nor will it keep you hostage on the tarmac. The company’s chief executive, Bill Diffenderffer, has rethought everything from the cost of onboard refreshments to how and where passengers check in. The result, he claims, is an airline that can charge as little as $10 for a nonstop flight without delays or lost luggage. (Procrastinators pay more, with last-minute tickets costing as much as $400.)

The guiding vision for the Columbus, Ohioâ€based company is simplicity. Launched in May, Skybus promises to get you to your destination on time, but it has no 800 number, no customer-service representatives, no TVs, not even free pretzels. (Your flight attendant will be happy to sell you a can of soda, though-she’s being paid on commission.)

Passengers can buy tickets online only and must check in by automated kiosk. To board, you’ll need to travel to smaller airports in places like Chicopee, Massachusetts, and Burbank, California, but in doing so, you’ll avoid the air-traffic headaches that dog so many major hubs.

So far, Skybus is flying five 144-seat Airbus A319s on just a handful of routes. If all goes as planned, by 2012, 80 Skybus A319s will serve dozens of cities across the U.S. We caught up with Diffenderffer, who explained to us how an airline that sells a ticket for the same price as a plate of meatloaf intends to fix our air-travel woes.

Q: The airline industry is plagued by bankruptcies. Is now really a good time to get in the game?

A: Airlines have built in an enormous amount of complexity, which invariably creates cost. But if you reduce costs, and reduce fares accordingly, there are tons of people waiting to fly. It’s not by doing any one thing that we solved the cost problem: We changed everything. We had $160 million (more start-up money than any airline in history) and the opportunity to design how an airline should be operated if the goal was to have the lowest possible fare-and still make a lot of money.

Q: How many tickets will you actually sell at the $10 rate?

A: We’ve sold 200,000 of them. We guarantee that on every flight there will always be at least 10 seats sold at $10. But even if you could fly for $100 one way to almost anywhere in the country, don’t you think there would be a lot of demand for that? In our first month, 86 percent of our seats have been full. For
a start-up, that’s an amazing number.

Q: You fly into obscure little airports, such as Pease International in New Hampshire. What’s the advantage?

A: Efficiency. If an airplane is not in the air flying in a straight line to its destination, it is costing money. The average taxi time of an airplane at JFK is 30 minutes. The average taxi time at our airports is 10 minutes. If a rainstorm hits JFK for a half hour, you’ve got a two-hour backup-at ours, you wait out the half hour and then you take off. It’s much easier to recover from a bad-weather event when there are never more than five airplanes on the ground.

Q: How will you get by with no customer-service number?

A: We designed our Web site so that you can accomplish everything easily there. But because of the other efficiencies in our model, we don’t have the kinds of problems that most airlines do. You’re not going to be stuck in Chicago when you’re flying from Columbus to L.A., because we don’t do connections. We don’t lose bags nearly as often because most bags get lost when they’re being connected.

Q: Your business model also requires passengers to pay for any extras-drinks, blankets-piecemeal. Will consumers go for that?

A: They were paying for it before! Those were never free. Why should you be made to pay for all those sodas and blankets that other people use that you don’t?

Q: You’re even charging for checked luggage, $5 a bag.