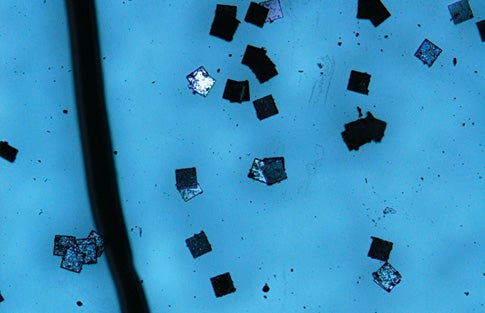 Small Talk: Hitachi’s radio tags are smaller than the width of a strand of hair

The diamond ring of the future will radiate its unique beauty-quite literally-thanks to a minuscule radio-frequency identification (RFID) chip embedded in it. Scientists at Hitachi Research Labs in Japan have devised the smallest RFID tag ever, just 0.05 millimeter by 0.05 millimeter, tinier than a grain of sand. The so-called powder chip is thin enough that it can be mixed with paper pulp to add a layer of counterfeit protection to gift certificates, passports and currency. It’s also caught the interest of the jewelry industry, which could invisibly embed the chip in rings and necklaces to track their origins, making them more difficult to sell illegally.

Each chip stores a unique 38-digit ID number. When stimulated by an RFID reader, the chip emits its code, verifying its identity. The code is integrated into the chip’s circuitry, making counterfeiting impossible.

Hitachi unveiled the chip in February and plans to take it to market in 2009. Wal-Mart might be one of the first retailers to debut the radio dust: The big-box store is pushing RFID technology forward to get your deodorant, bagels and T-shirts from factory to aisle faster.