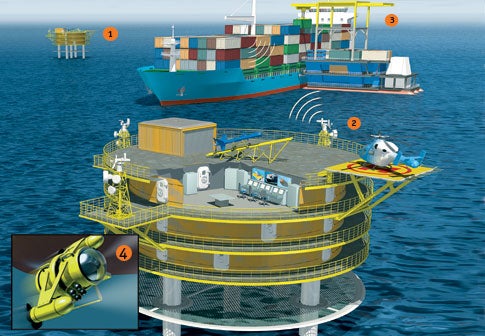 To security experts, the immense cargo ships that ferry more than 11 million containers into this country annually are potential Trojan horses-each one could easily harbor a WMD, such as a dirty bomb. Typically, only once the ships have been unloaded is their cargo subjected to random inspections and radiation scans. “There is an urgent need to effectively screen cargo before it reaches the ports,” says Charles Meade, a senior scientist at the RAND Corporation, a nonprofit think tank.

Now Florida start-up SeaAway has developed a security system that would move cargo screening 14 miles offshore to the safety of the open seas. The plan calls for pairs of 100-foot-wide platforms anchored outside the world’s major ports. Equipped with an array of sensors and unmanned surveillance drones, the system monitors for chemical, biological and nuclear traces as ships travel between the platforms.

Construction begins this summer on a prototype system. Kroecker won’t disclose specifics but says that SeaAway is in talks with officials from four ports in the Caribbean and one on the U.S. eastern seaboard.