Junk In, Power Out

A mobile bioreactor turns trash into electricity for U.S. troops 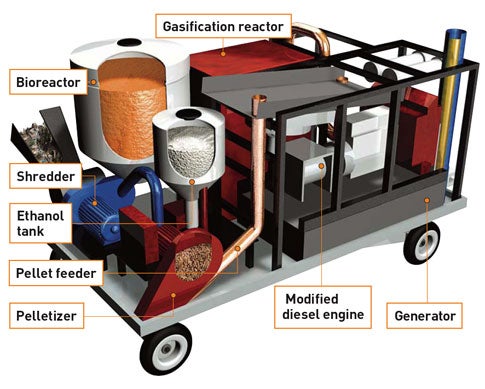 The cow is a model power generator: Each day it expels enough methane to run your home furnace for 24 hours. At Purdue University, a team of nearly two dozen researchers has built a portable device that mimics this natural metabolic process to create electricity. The “biorefinery,” which is three years and $850,000 in the making, can digest ordinary kitchen scraps and other trash to produce ethanol and a composite gas and use them to fuel an electrical generator.

The device was designed for the U.S. Army, which solicited researchers for ways to slash the amount of fuel it uses to run diesel generators and to reduce the output of garbage from a typical 600-person field support unit. (An Army soldier produces an average of four pounds of trash a day.) “We wanted a twofer,” says Jerry Warner, founder of Defense Life Sciences, a private contractor that partnered with the Purdue scientists. “Get rid of the trash and conserve fuel at the same time.”

The refinery works like a giant digestive tract. After a shredder chews up trash, enzymes digest it into simple sugars, which yeast metabolizes to produce ethanol. Any leftover waste (paper cups, plastic forks and so on) is packed into pellets and burned to produce a gas composed primarily of methane, propane, carbon dioxide and hydrogen. The refinery blends this gas with the ethanol and uses it to run a modified diesel generator.

About the size of a moving van, the biorefinery is entirely self-contained and self-powered. Feed it 2,500 pounds of trash a day, and it pumps out enough electricity (60 kilowatts) to run a large mess-tent operation or three homes.

The biorefinery could also be housed in a large office building or hospital, where excess thermal energy could be used to heat water. Or it could be dispatched to a disaster area and pull double duty, helping clean up the mess and lighting a city left in the dark.

Warner and the Purdue team demonstrated the machine for Army officials last November and are building a second prototype to test later this year.