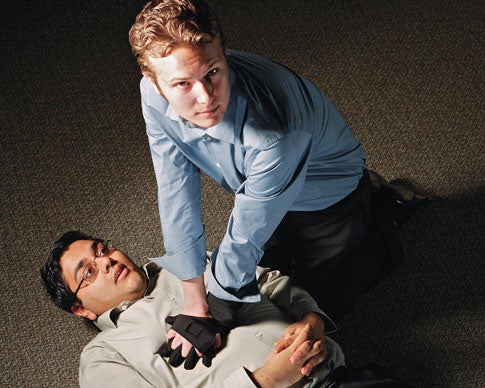 A HELPING HAND Nilesh Patel isn´t really in trouble, but if he was, the CPR glove he and classmate Corey Centen built would give him as much as a 50 percent better chance of living by making sure Centen performed the CPR right.

Of the 300,000 people in the U.S. who suffer cardiac arrest every year, only 5 to 10 percent survive. Researchers think that number could quadruple if CPR was performed more often and correctly. The problem is that the procedure is almost never done right: Nearly 60 percent of the time, compressions don’t reach the required 100 per minute. And 37 percent of the time, compressions don’t go deep enough into the chest. Corey Centen and Nilesh Patel, classmates at McMaster University in Ontario, stumbled across these statistics while brainstorming an idea for their engineering class’s final project.

Realizing how little of their own high-school CPR training had actually stuck, the two came up with a glove that shows people how to correctly perform CPR while they are actually doing it. The glove could solve one of the most challenging problems in cardiac care. “They have a really nifty idea,” says Benjamin Abella, associate director of the Center for Resuscitation Science at the University of Pennsylvania. He describes the current state of CPR as “like trying to fly a fighter jet without air-speed monitors.”

Although the prototype glove is made of a cheap nylon-spandex composite (sewn by Centen’s aunt), it’s loaded with circuits and sensors. When it’s placed on a person’s chest, an electrocardiograph measures heart rate to indicate whether CPR is actually needed. A metronome beeps to signal proper compression timing. Accelerometers and piezoelectric sensors trigger video feedback about whether the compressions are deep enough and cue the rescuer to lean over and blow air into the victim’s mouth. The glove hasn’t been tested on humans, but the students say that it works on the sophisticated simulator mannequins used in cardiac testing, and it recently won first place in the Ontario Engineering Competition for innovative design.

With their ramen-level budget depleted, Centen and Patel are looking to hook up with a medical-device company that can help them develop the glove further and take it through FDA trials. They estimate that a mass-produced version could be made for as little as $60. The project earned them an A+ from their professor, but good grades aren’t the goal anymore. “We want to get this out there as fast as possible-and make it as accessible as possible-to save lives,” Centen says. How’s that for senioritis?