A Few Leagues Under the Sea

A California research team reveals how Mavericks, one of big-wave surfing's most famous breaks, is formed

Scientists at California State University at Monterey Bay have discovered why the state’s most famous big wave, Mavericks, off the coast south of San Francisco, is so big. The wave, which draws some of the world’s best surfers for an annual surfing contest, can reach up to 50 feet tall. Researchers uncovered the mystery this spring while conducting the most detailed mapping yet of the ocean floor off California’s coast.

Using multibeam echo sounders, workers in conjunction with the National Oceanic and Atmospheric Administration have been trolling up and down the coast taking detailed sonar readings of the ocean floor. To do this, several sonar beams are pointed at a 75-degree angle from the boat to cover a wide swath of seafloor. The sensors measure how long it takes for each sound wave to bounce back. The time between when the signal is sent and when it returns indicates the depth. Sonar is hardly new, but what is new is the ability to get such high-resolution images from the resulting data. “It’s like we’ve pulled the plug and drained the water so we can get an aerial view,” says Rikk Kvitek, director of the seafloor-mapping lab at the university.

Thanks to advances in underwater mapping techniques pioneered by the oil and gas industry, researchers can get far more detailed views of the ocean floor than ever before, anything down to the size of a lounge chair, according to Kvitek. That’s because they can now correct for variables like tides, the surface motion of the boat and other interferences that led to unreliable readings in the past. The boat’s motion is measured 200 times per second, and even the tiniest movements are taken into account, as the sonar system collects 3,000 soundings a second. In shallower water, where side-angled sonar is less effective, Kvitek’s group plans to get readings from lasers mounted on a plane that will fly up and down the coast.

Of course, the non-surfing scientists at NOAA are studying more than just why Mavericks breaks the way it does. The organization is mapping the ocean floor to help isolate potential hazards like underwater faults and landslides or areas where tsunamis may be more likely to hit the coast. A detailed view of the seafloor can also help scientists learn where nutrients are likely to well up from the deep, providing feeding grounds for marine species and allowing the creation of protected wildlife corridors in the areas that matter most. So far, about one third of the coastal ocean floor has been mapped.

So what’s the deal with Mavericks? It turns out that the massive wave is the result of a long, slow ramp that rises up toward the coast. It’s surrounded on either side by two parallel trenches. As the water rises up the ramp and slows, due to friction, the deep water on either side is drawn into the wave, making it even bigger until it breaks. Unfortunately, all that information was no help for the 2007 Mavericks Big Wave Championship. A score of champion surfers, including Grant Baker and Anthony Tashnick, were invited to participate in the contest between January 1 and March 31, but the big wave never came this year, and the invitational was ultimately canceled because of a lack of surf.

**
For images of the findings and research vessels used to collect data, launch the slideshow here**.

Courtesy of the MBNMS: This fly-through animation begins approximately 1/2 mile offshore from Pillar Point north of Half Moon Bay. The 3-D image is color-coded by depth: the blue and green areas are deeper than the areas in yellow and red. 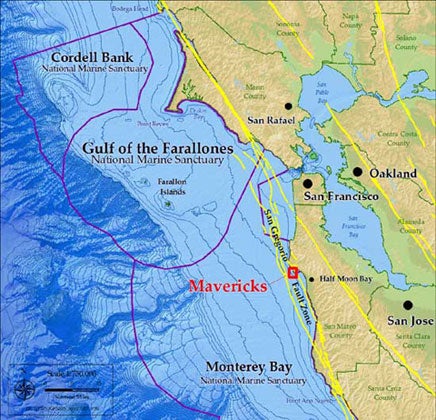 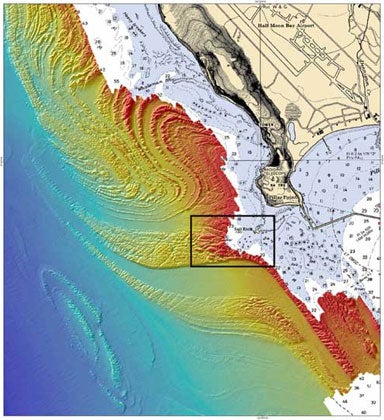 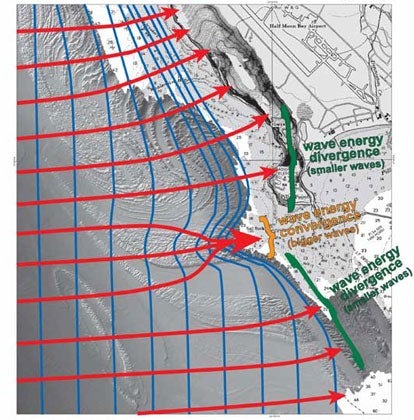 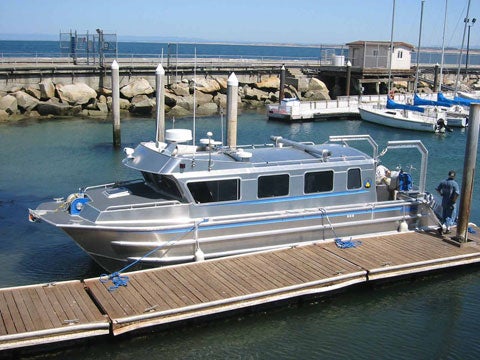 Research vessels, like the Van Tresca, a US Geological Survey ship, were used to collect some of the earliest data on the sea floor. 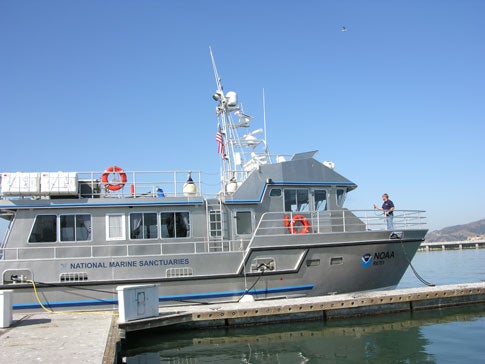 In order to verify measurements or observations made underwater, the Research Vessel (R/V) Fulmar is being used to “groundtruth” the images that were obtained remotely by other research vessels.
Conservation
Ocean
high resolution images
national oceanic and atmospheric administration