Workers of the World, Unite!

Realistic videoconferencing is the single most important development in the future of the workplace, and it's already begun to arrve. Prepare to face the boss

Alexander Graham Bell had it right from the beginning. “Mr. Watson,” he called to his assistant through the first working telephone, “come here-I want to see you.” Fifty years later, the first television transmission made his words literal. And now, 130 years later, the pieces are falling into place to finally let us all be seen.

The promise of a video telephone has been around for years, of course. But now the essential factors are truly in place to give you the digital equivalent of a face-to-face experience with co-workers thousands of miles away. And of all the advancements you’ll see in your workplace over the next 10 years, realistic videoconferencing is the one that will change everything.

Existing graphics-processing power and bandwidth already make videoconferencing possible. What will make it intuitive and effective is sophisticated, low-cost camera technology and flexible, dynamic video screens. Next-generation videoconferencing isn’t like today’s monitor-size peephole to a tiny, jerky, muffled slice of life. It’s rich enough to capture all the gestures, expressions and other essentials of human communication.

“It’s an emotional and physical link between us,” says Hewlett-Packard research scientist Mark Gorzynski, shaking his head at the thought-which I know because I can see him doing it on the high-definition video screen in front of me. I’m at HP Labs in Palo Alto, California; Gorzynski is in Corvallis, Oregon. But we’re “together” in HP’s Halo Collaboration Studio, a setup the company introduced a year ago. (Cisco debuted a competing system last month.) Each Halo room is, in effect, half of a beige conference room, linked to any other identical-looking Halo room by four 60-inch plasma screens, an echo-free audio system, and a proprietary, low-latency, superfast data network. The sound is good enough to have multiple simultaneous conversations across the table, and I repeatedly forget that there’s a lot more than a table between us. HP has installed 75 Halo rooms around the world: an early one for Jerry Seinfeld, who is producing his new animated movie from a Halo room in his New York office linked to Dreamworks’s California studio, and the rest mainly for pharmaceutical and financial-services companies, which must constantly communicate with a far-flung sales force.

Halo remains expensive ($500,000 per room) and clunky. You can’t pace around or carry it home. But as its popularity grows, it will become both more useful and more intuitive. As Robert Metcalfe, the inventor of Ethernet, formulated, the value of a telecommunications network increases exponentially with the number of users in the network. It took only a decade for e-mail and cellphones to go from novelty to global ubiquity. Once videoconferencing is as seamless as a phone call, our innate sociability will kick in and make it instinctive. Perhaps you already check your e-mail before work. Soon you may also pop into the office virtually before actually arriving.

Back at HP labs, a group of researchers sit me down in front of a large, curved movie screen. Desktop windows begin popping up. In one corner, a regular Windows XP desktop appears against a black backdrop, then a videoconferencing window, then another-all seamlessly thrown on the screen by three carefully aligned off-the-shelf LCD projectors. On cue, the images begin resizing and circling each other. I stare at a computer screen all day, but this is like being inside the IMAX version. On this sort of wall-size monitor, “something magical happens when you fill the field of view,” says HP researcher Bruce Culbertson with a chuckle. And the video feed is running off an ordinary PC.

In an adjacent room, the HP scientists show off a prototype “fan camera”-an array of 22 cheap cellphone cams, all attached to a single mount about the size and shape of a soup bowl. The individual video feeds are then stitched into a single panoramic image, allowing the camera to pan without any mechanical movement.

Finally, Culbertson punches at a keypad, and a heavy door clicks open. Waiting for us inside is Dave Nguyen. Kind of. He’s actually in Berkeley, 40 miles away, but his 3-D image is before us, projected on a flat screen coated with electro-reflective material, like the type used on highway road signs, that replaces the need for special glasses. The image is a bit blurry, and I have to stay still in just the right spot, but the setup pulls off a trick no current videoconferencing system can do: eye contact.

We play a quick game. Nguyen looks at one of the three of us sitting on this side of the screen, and the recipient of his gaze raises his hand. It works. As Nguyen shifts his eyes among us, we each raise a hand, as if saluting our future.

For more insight into how videoconferencing today will revolutionize business tomorrow, check out the slideshow. 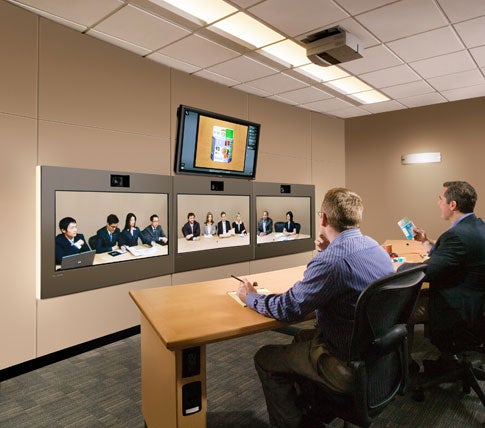 The Speed of Light

Videoconferencing might still be the exception rather than the rule, but the technology is quickly catching up with the demand, and it may be as few as 10 years before this is how business is regularly conducted. HP has already installed 75 of these rooms around the world, including one in Jerry Seinfeld´s New York office. 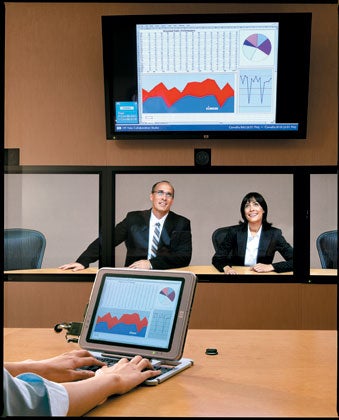 Is that your boss across the table, or a 3-D image from halfway around the globe? The Halo Collaboration Studio uses plasma screens and an extremely fast data network to mimic a physical conference.
alexander graham bell
feature
plasma screens