When Osman Ozcanli and his team of technology hunters get their hands on the world's best technologies, something remarkable happens.

When Griffin Technology was developing their iTrip nano, they needed a better way to attach the player to the transmitter. So they turned to a tape dispenser they’d recently been sent by Inventablesâ€â€a Chicago-based innovation company. There was nothing particularly unusual about the dispenser except that its bottom was coated with microscopic suction cups that allowed it to stick to most surfaces an unlimited number of times without losing adhesiveness or leaving a residue. The material turned out to be a perfect solution, and today every iTrip nano has a thin line of micro-suction tape that adheres it to the iPod.

Griffin Technology is just one of Inventables’ many clients, a group that includes companies like Procter & Gamble, Nike and Mattel. Every quarter these companies receive samples of new technologyâ€â€a piece of paper that changes colors when exposed to odors, for instanceâ€â€as well as applicable concept designs (one idea for the color-shifting paper was a milk carton that could visually display when the milk soured).

Discovering these technologies takes some legwork. At any given moment, Inventables’ team of “technology hunters” is combing the Internet, parsing through tradeshows, and circling the globe in hopes of finding the next micro-suction tape. The team’s head, Osman Ozcanli, whittles the thousand finds per quarter down to a workable number, and every week sits with a group of designers, students and Inventables employees to brainstorm applicable concepts. But in the end, what Inventables ends up selling is no more than a way to think outside of the box. “Each company already has its own advanced research team,” explains Ozcanli. “We help them make sense of technologies they aren’t able to consider.” Unhemmed by specifics or even practicality, they create lavish innovations giving new life to some of the world’s most creative, if underutilized, technologies.

In the May issue of Popular Science, we featured one such creation: a shoe that could change its pattern with the press of a button using an invisible power source. The idea was based off of a thumb drive Ozcanli had picked up; its display showed the available storage space remaining at all times, drawing power from the computer only to update the information but requiring none while the display remained static. Here are four more conceptsâ€â€some, like the Transparent Toaster, similarly distant; others tantalizingly closeâ€â€and the technologies that inspired them. 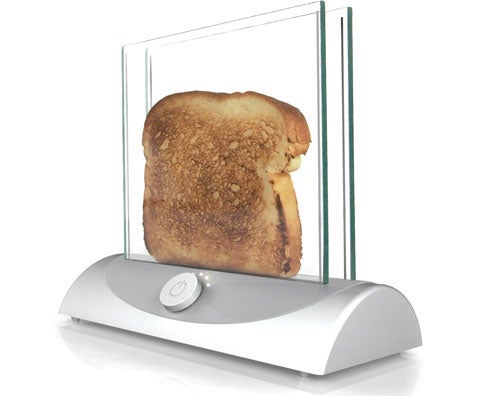 Burned toast will never again be an issue with a see-through toaster. The bread sits between two pieces of glass whose interiors heat up enough to brown your breakfast, while staying cool on the outside to prevent burns. 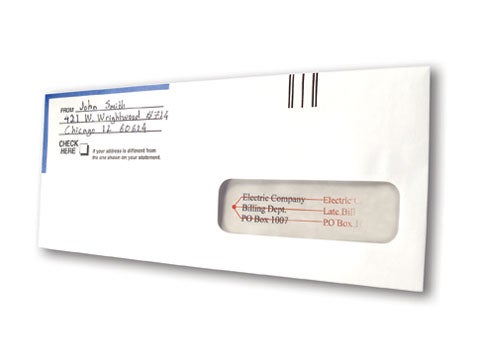 When this bill is mailed out, it is “activated.” Once the bill becomes overdue, after 14 days, time-sensitive ink crosses out the old address and displays a new address for the overdue bill. 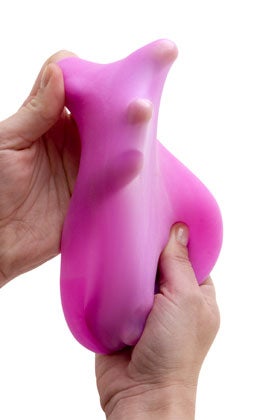 Incredibly soft plastic stretches about eight times its original size. The very durable material yields easily but can be injection molded to any shape. 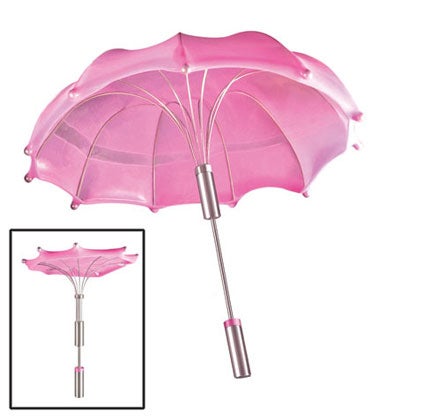 The umbrella pairs an elegant mechanism made from Nitinolâ€â€an extremely flexible alloy-with super-elastic plastic to create a canopy that would be more durable and easier to manufacture than a conventional umbrella. 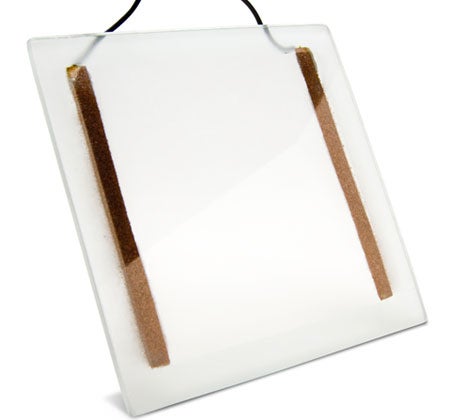 The glass heats up thanks to copper bars on each side that carry electricity through a transparent metal-oxide coating (Fluorine-doped Tin Oxide). 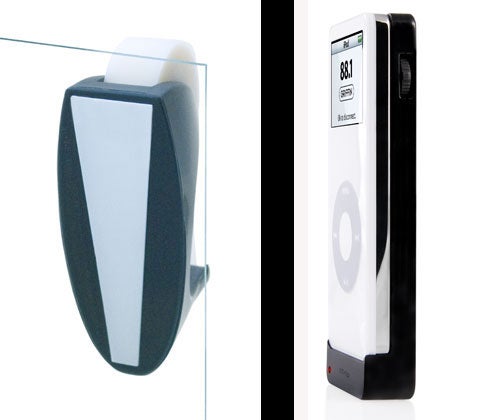 This heavy dispenser sticks to the glass thanks to a strip of micro-suction tape. Its underside is coated with thousands of microscopic craters that work by creating many partial vacuums between the tape and the target surface. Griffin utilized the same technology in their iTrip nano. 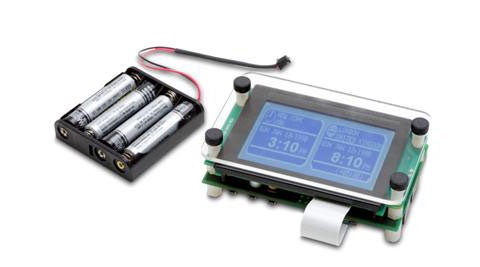 This electronic display shows a message without any electrical connection. It can be reprogrammed and, if powered, can display several screens that alternate like a neon sign switching between two or more messages. 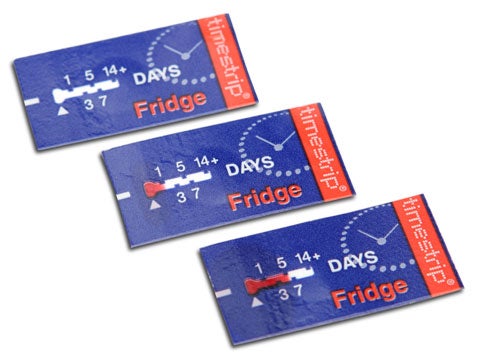 The red line progresses along the strip over a predetermined period of time. A bump on the back is squeezed to initially activate the inexpensive, disposable timer. 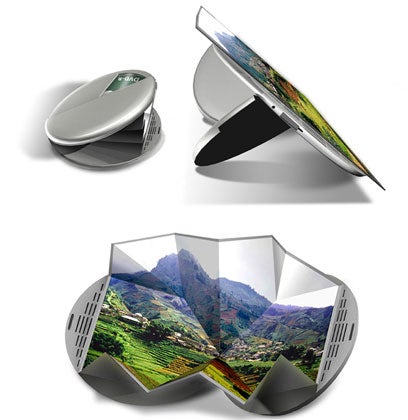 This portable DVD Player sports a foldaway color e-paper screen. Closed, the concept player would barely be bigger than the disc itself. 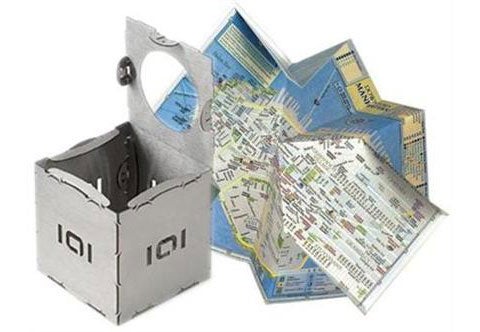 A unique folding design allows the large map to fit in a small space but open neatly and instantaneously. 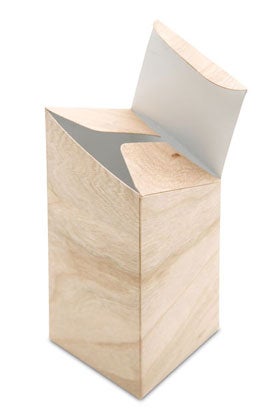 It looks like paper, but this super-thin, real-wood product brings the look and feel of wood to applications where real wood couldn’t be used before. 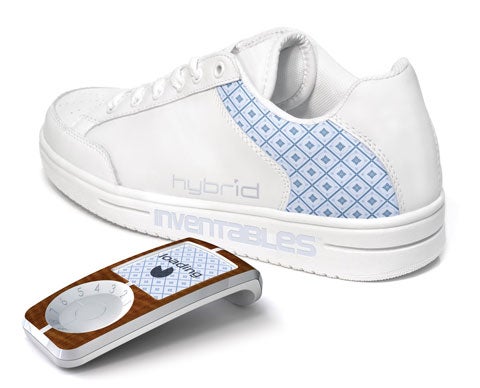 These sneakers incorporate a screen that can show a two-color design or message indefinitely, using electricity only when it changes. Walk into a party and see someone with the same shoes? Reclaim your unique style by pulling out your phone and beaming a new pattern to your feet.