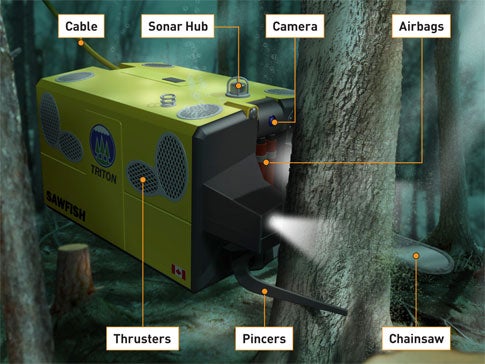 During the past century´s hydroelectric bonanza, the reservoirs that built up behind dams flooded massive swaths of forest. An estimated 300 million trees worldwide ended up underwater-that´s $50 billion worth of timber just waiting for the ax. Previous underwater logging attempts relied on human divers or barge-based grappling hooks. But humans can easily dive to only about 80 feet, which puts most submerged forests out of reach.

To better get at all that lumber, underwater-harvesting specialist Triton Logging in Canada has built the Sawfish, a minivan-size, 7,000-pound, sonar-endowed, $1.2-million remotely operated robotic chainsaw. Good to 1,000 feet, the Sawfish can cut down 100 trees in a day´s work. Triton is now tweaking two prototypes in its British Columbia testing lake with plans to sell commercial versions later this year.

A barge-based joystick jockey pilots the submarine by means of a fiber-optic tether. Once the operator targets a tree using a live video feed and sonar, the Sawfish grabs the trunk with hydraulic arms, attaches and inflates an airbag, and finishes the deed with its 4.5-foot-long chainsaw, which can buzz through a 24-inch-diameter trunk in less than 10 seconds. The airbag buoys the log to the surface, where a barge picks it up and hauls it to a mill.

Despite pickling for decades, underwater timber is still in good shape because oxygen, not moisture, causes it to rot. In fact, with less air underwater and no exposure to pests or fire to worry about, the wood actually lasts longer than its open-air kin. The logs take some extra time to dry out, but the end result is top-quality lumber-and no clear-cutting scars.

ANATOMY OF A SAWFISH

EYES AND EARS Eight video cameras stream live views from around the submarine to the sub´s pilot above water. Sonar maps the murky waters beyond the cameras´ reach.

PINCERS Five-foot-long hydraulic arms clasp the tree trunk to hold the Sawfish in place during drilling and cutting. To keep things environmentally friendly in case of a leak, vegetable-oil-based hydraulic fluid supplies pressure to the grappling arms.

AIRBAGS Rather than haul each tree to the surface, the Sawfish puts buoyancy to work. A drill attaches a flotation bag to the trunk and inflates it with air, creating 500 pounds of lifting force. The Sawfish carries enough of the reusable airbags to send up to 50 trees to the surface in a single dive.

CHAINSAW With the airbag inflated and the trunk in a hyd-raulic vice grip, the Sawfish goes on the attack: A 55-inch-long chainsaw swings out and revs up. The blade can chew through two-foot trunks in five to 10 seconds.