An Ear for Snipers 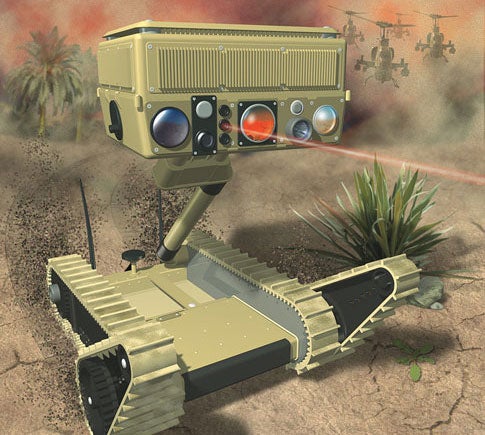 The RedOwl is a robotic head that looks more like a PowerPoint projector than a sharpshooter’s worst enemy. But don’t let its Circuit City appearance fool you: Controlled by a laptop-wielding soldier, the RedOwl’s superior senses can read a nametag from across a football field and identify the make and model of a rifle fired a mile away simply by analyzing the sound of the distant blast. And soon it could be putting its powers to use in Iraq.

RedOwl’s developer, Glenn Thoren, now a director at Insight Technology in Londonderry, New Hampshire, says several prototypes have finished an intensive 10-week field test at Fort Benning in Georgia. Given the defense department’s budget approval early this year, he hopes the $150,000 sniper-finders will be in Iraq by this spring.

The robot’s mechanical ears were originally designed to improve hearing aides. But Thoren, then with Boston University’s Photonics Center, which heads the RedOwl project, thought up a new application after learning of a spike in sniper activity surrounding Iraqi hotspots like Abu Ghraib prison. He combined the original listening system-which processes sound received by four microphones to determine the direction and elevation of a noise-with a suite of sensors, spotlights and a laser rangefinder. When the RedOwl hears gunfire, it swivels its head toward the source of the noise. A thermal imager can pick out the sniper while an infrared spotlight illuminates him for night-vision-equipped troops.

Attached to a PackBot, a miniature robot tank built by iRobot in Burlington, Massachusetts, and steered by a modified Xbox videogame controller, the RedOwl can also enter dangerous buildings in advance of soldiers. “Were hoping to put the robot in situations where it would be less safe for a soldier,” Thoren says.

When a shot is fired, the incoming sound waves pass over four microphones, and a processor parses the data to pinpoint the source of the sound, all in a few milliseconds. The system can recognize weapons by their report, and thus ignore friendly fire.

A central camera allows the remote operator to see where the RedOwl is going, and a powerful zoom cam enables the operator to study potential snipers without getting too close. RedOwl´s lasers can illuminate a target up to a mile away. Because the laser is infrared, the sniper won´t be aware he´s in the spotlight, but soldiers with night-vision goggles will see him perfectly.

A laser rangefinder bounces a beam off the target, and RedOwl calculates the intervening distance. Factoring in its own GPS position and using a magnetic compass to determine the direction in which it´s looking, RedOwl can figure out the location of a target 3,000 feet away, allowing troops to call in a precision air strike.