If We Destroy Our Planet

Will science find us a new one? 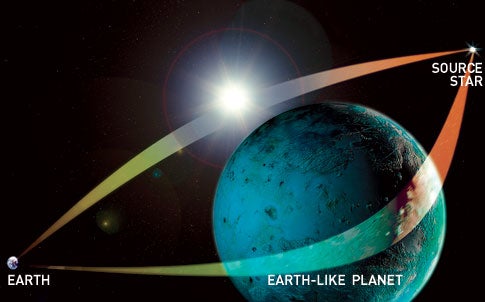 Scientists are exploiting one of Einstein’s predictions to find Earth-like planets around other stars–planets that might even support Earth-like life. Let the evacuation plans begin!

WHY: To determine whether we are alone in the universe. We’re much more likely to find life on a rocky planet than on a gas giant like Jupiter–and if the human race needs to find a new home in the future, rocky exosolar planets will probably be our destination. Also, some scientists theorize that small, solid planets outnumber gas giants (10:1 is a conservative estimate), but until now they couldn’t test that hypothesis.

WHERE: All across the globe. A loose network of astronomers point their telescopes at the center of our galaxy, where they can see many stars at once. Because gravitational-microlensing events happen over the course of 10 to 40 days, research teams on different continents record data as dawn–and the end of viable observation time–approaches for their cohorts.

WHO: Two international teams of scientists, based in Chile and New Zealand and assisted by hundreds of volunteer astronomers, look for microlensing events across huge swaths of sky. They alert each other of probable events by Web and e-mail.

How many planets have been found?

Around 200. Most have been spotted by looking for wobbles in a star’s motion that are caused by the gravitational attraction of a planet. But since this method preferentially finds huge planets that orbit close to their suns, it’s turned up mostly “hot Jupiters.”

Are any of them earth-like?

Not yet. Microlensing has found four small, solid planets. But they are too far away from their suns–and thus too cold–to support life. (The Scorpio planet is estimated to be a bitter 364 degrees.