Invisibility is a staple of science fiction, from H.G. Wells to Romulans. Now scientists see a way to make objects disappear 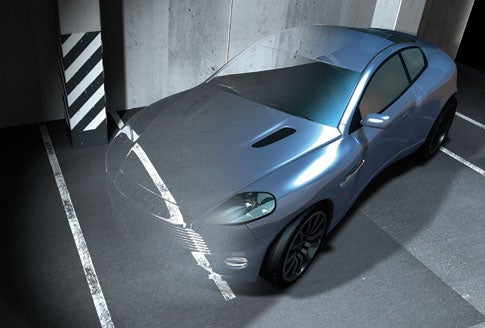 Scroll to the bottom of the page for a video simulation of an invisibility-equipped Aston Martin. And for a timeline detailing the history of innovations in the science of invisitbility, click ‘View Photos’ at left.

WHAT: A way to make objects invisible. The trick is to use metamaterial, a complex hybrid structure of metal and insulator that makes light move around an object like air flowing over an airplane wing. In a process called refraction, these materials interact with light in such a way that it travels faster through the metamaterial than it does through a vacuum, the famed c in Einstein´s special theory of relativity.

Properly tuned, the light emerges from the shield as if there were no object present. But unfortunately for would-be spies, it´s very difficult to make cloaking devices that work on more than one wavelength of light at a time.

WHY: Military stealth. A B-2 bomber isn´t truly invisible to radar. It just absorbs and redirects the radar waves, making the plane much harder to spot (its radar signature is the size of a pigeon rather than an aircraft). A bomber, tank or building covered in a radar-sensitive metamaterial shield would literally disappear from radar screens.

WHEN: For certain applications, commercial deploy-ment could be within a decade. The best-studied metamaterials work only on microwaves. Duke University physicist David R. Smith hopes to shield a toaster-size object from microwave frequencies within the next six months. Metamaterials that work on visible light-which isn´t a single frequency but a spectrum of frequencies-are at a more primitive state. A specific metamaterial design would be required to redirect each frequency in the visible range, and integrating that many components into a device might take 10 years for the initial lab demonstration alone.

WHO: The mathematical models were developed independently by two groups, the first led by Ulf Leonhardt at the University of St. Andrews in Scotland and the second by Smith with John Pendry of Imperial College London. Smith could soon prove the concept experimentally.

Has anyone made a metamaterial?

Yes. Scientists in the U.S. and the U.K. have made metamaterials with what´s called a
negative index of refraction. Generally, these metamaterials are coiled metal wires surrounded by air or another insulator and affect only microwave radiation.
Can the cloaking be perfect?

Almost. Any metamaterial absorbs a little bit of light and therefore casts a slight shadow.

Could an actual cloak ever hide a person?

Yes, but current designs would work only if you painted yourself all one color. A cloak, which for comfort´s sake needs to be pretty thin, could bend radiation of just a single frequency, so it could only hide an object of one color. There´s a possibility, though, that a thick shell could include a wider variety of metamaterials and broaden the invisibility to multiple frequencies.

What would the inside of the cloak look like?

If a cloak worked over the entire spectrum, the lack of light would make the inside black, and you wouldn´t be able to see outside. No one knows exactly what would happen if you turned on a flashlight inside the cloak.

Can’t see this? Download Flash, or get the video in Quicktime format here. 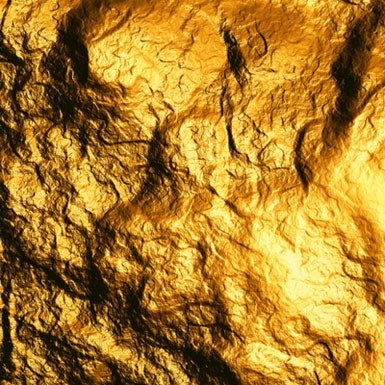 British and Russian researchers deposit rod-shaped gold pieces onto a surface, creating a metamaterial that interacts with near-visible light. 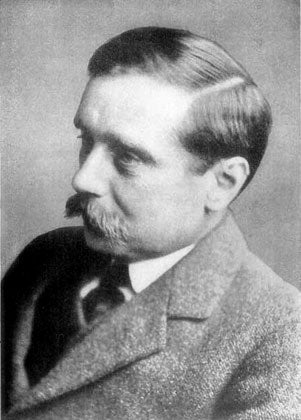 In The Invisible Man, H.G. Wells introduces the idea, then fictional, of a scientific route to invisibility. The protagonist uses bleach and mysterious rays to make himself invisible. 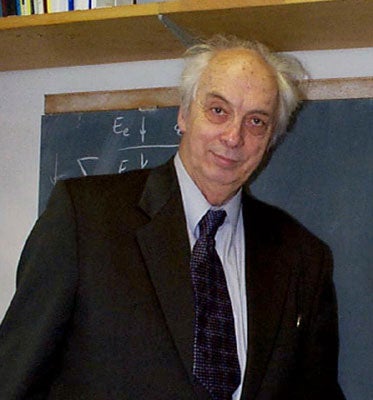 Ukrainian theorist Victor Veselaago predicts the possibility of building metamaterials that act as light accelerators. It will be 30 years before anyone can craft them in the lab. 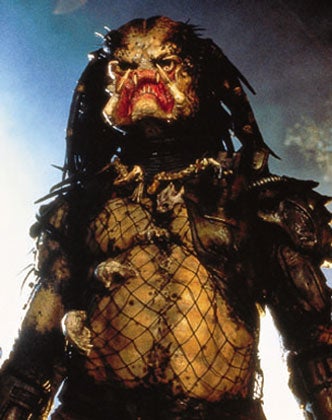 The movie Predator features invisibility in the camouflage of an alien hunter. Guess what? It was a fairly realistic fictional presentation of the phenomenon, says physicist David R. Smith. 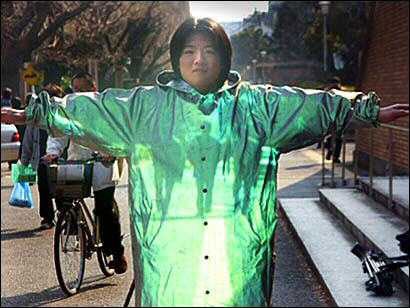 Engineer Susumu Tachi of Tokyo University demonstrates an “invisibility” cloak. Instead of bending light, it projects an image of a background onto the wearer´s front. 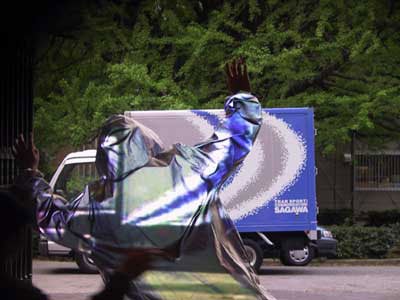 Tachi’s invisibility cloak from another angle.