Tied To a Terrorist

Why I think I'm on the government's watch list 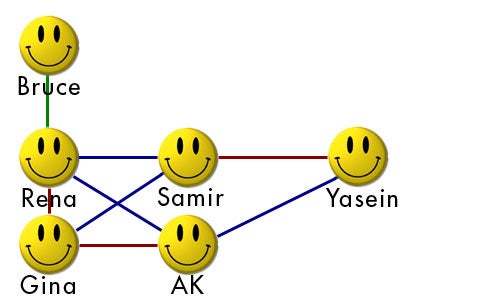 To measure the significance of my connection to the Buffalo Six, Krebs generated a simplified version of an SNA map. As it turns out, I have the best location in the network because I have the highest level of betweenness. That is, I´m between two important players: weapons expert BRUCE and sleeper cell agent YASEIN. Theoretically, I could play the broker role in the network, so if you wanted to stop the flow of information between those two characters, you would nab me. In reality, Krebs explains, there would be far more players and connections. As investigators filled in the missing data, my significance in the network would diminish.

When I told my PopSci colleagues I was sure the government was watching me, they laughed and chalked it up to too many X-Files reruns. When I mentioned that I was sure my phones were tapped, they looked at me the same way they did when I told them my boyfriend and I had agreed upon a secret question to verify each other´s identity-you know, in the event an alien imposter takes over one of our bodies. Okay, I know what you´re thinking: paranoid crazy lady. Really, why would the government (or aliens for that matter) be interested in me? I´m a latte-drinking, sushi-eating New Yorker with a shopping habit and a penchant for bad science fiction. Certainly not a threat to national security.

Or am I? One way for government sleuths to find potential terrorists is to start with a known suspect and then plot that person´s connections to friends, family and business associates on a computerized graph, a technique called social network analysis (or SNA, a topic we covered in the August issue of PopSci). Think â€Six Degrees of Kevin Bacon,â€ but a lot more complicated.

Unfortunately for me, a series of coincidences have put me just two degrees of separation away from a possible terrorist sleeper cell agent (now in prison), and one degree away from about half a dozen nuclear weapons specialists. â€It´s the kind of thing that 99 out of 100 people would look at and say, â€Oh man, we have a problem,´â€ says leading SNA expert Valdis Krebs, after mapping my relationships (see illustration below).

The fact that I ended up in the social network of the first sleeper cell found on U.S. soil, the so-called Buffalo Six, is actually not that surprising. A close cousin of mine, GINA (All players´ names are in caps, to help you follow along on Krebs´s map), married into the tight-knit Arab community to which all six members belonged, including YASEIN Taher.

But I was engaging in other activities at the time that would have caught the eye of any enterprising investigator. Around the same time the F.B.I. was building its case against the Buffalo Six, YASEIN´s brother SAMIR started calling me every time he visited New York. (The guy developed a crush on me and coaxed my number out of AK, my cousin GINA´s husband and SAMIR´s best friend.) Also, while researching an article for PopSci, I Googled ways to build nuclear weapons, read up on weather patterns that increase the number of casualties following a detonation, and called weapons specialists like BRUCE. And I almost always flew one-way because I have commitment issues when it comes to making travel plans. Oh, and did I mention that years earlier, I lived with GINA at the same address where a few of the Six resided at the time of their arrest? Finally, I just happened to be in Buffalo the night of the arrest, and my car was towed only a few blocks from that same house.

So when I called Naval Postgraduate School counterterrorism expert John Arquilla, told him my story, and asked if he thought it possible that the government flagged me, tapped my phone, and directed airport security to â€randomlyâ€single me out for extra searching every time I tried to board a plane, he said it wouldn´t be appropriate to give an answer, but that the likelihood of false positives in this business is high. Krebs told me, â€It would take some real detective work to figure out if you are a person of interest or not.â€ But, he reassured me, they would eventually figure out that I´m innocent.