Experts go head to head on the issue of nanotech safety 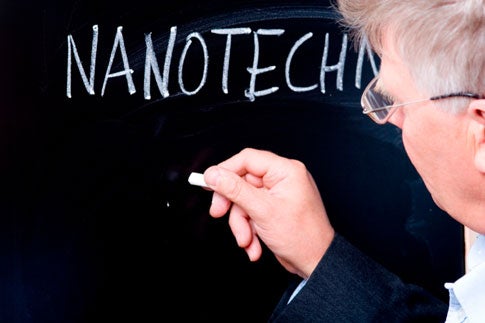 There´s nothing tiny about the international controversy brewing over the safety of nanomaterials. In April, a German company recalled a tile sealant called Magic Nano after dozens of consumers suffered breathing problems while using it. Never mind that the product contained particles too large to actually count as nanomaterials (which must be smaller than a billionth of a meter)-the scare was on, and European confidence in products labeled â€nanoâ€ had already sunk. In the U.S., trouble ramped up in June when an EPA study found that titanium nanoparticles commonly used in sunscreens cause neurological changes in mice. Since then, at least eight organizations, including Friends of the Earth and The International Center for Technology Assessment, have called for safety assessments of 116 personal care products on the US market, many of which required no FDA approval before hitting the market.

But is nanotech getting an unfairly bad rap? Manipulation of materials at the nano level has potentially ground-breaking applications for medicine, for example (click here for examples from our Future of Medicine slideshow), and some scientists worry that one of the industry’s biggest challenges will be overcoming its PR problem.

To get to the heart of the issue, we talked to two experts on opposing sides of the debate. Hope Shand, research director of Ontario-based human rights organization ETC Group has called for a worldwide moratorium on nanotech until the full scope of the technology, and its risks, can be understood. Christine Peterson is founder and VP of Public Policy for the Foresight Institute, a think-tank in Menlo Park, CA dedicated to the beneficial implementation of nanotechnology. Here, they face off about the big picture of this small-scale science.

Christine Peterson:** Not necessarily. It depends on the specific material. There are, of course, concerns that the small size will allow certain particles to pass through barriers such as the skin or lungs. From the research done so far, it isn´t clear that just because something is small enough to penetrate a barrier, it necessarily will. However, other research has found that certain nanoparticles can and will pass between the blood-brain barrier, which could be harmful. Materials act differently at the nanoscale, and you can´t just assume that they´ll be as safe as they are at the macroscale. Gold, for instance, is highly reactive at the nanoscale.

Hope Shand: We don´t know for sure. What we do know is that there´s a virtual consensus among scientists that the toxicology of engineered nanomaterials is largely unknown. That is, while the materials used in creating a nanomaterial may play a role in determining toxicity, it seems that the size of the nanomaterial plays an equal or even more important role. The reason for this is because the smaller the particle, the higher the percentage of atoms on the surface; a high percentage of surface atoms corresponds to a high level of reactivity. In general, the more reactive a substance, the more toxic it becomes.

DOES THE PUBLIC´S PERCEPTION OF THE SAFETY OF NANOMATERIALS MATCH REALITY?
**

CP:** A small segment of American society is perhaps over-concerned about the dangers of nanoparticles, while the vast majority are paying no attention at all. The activists who did the sunscreen press conference are the ones who are most interested, and their views may be a little exaggerated. The general public is totally unconcerned and that´s perhaps a little too easy-going of an attitude. The right answer lies somewhere in the middle, as some of these materials are going to end up being a problem and some are not.

**
HS:** I believe that people are largely in the dark about this issue. That being said, by allowing nano-products to come to market without public debate or regulatory oversight, government and industry are jeopardizing nanotech´s future.

**WHY HAS THE NANOTECH INDUSTRY SELF-REGULATED MORE THAN MOST EMERGING TECHNOLOGIES? **
**

CP:** What you keep hearing over and over again within the industry is that they don´t want another genetically modified organism fiasco. Not that GMOs have necessarily been proven dangerous; nonetheless, they have essentially been rejected within Europe. So the nanotech industry wants to build a world market for their products, and are therefore being much more careful than an emerging industry normally would be because they have such a recent and vivid example of the very problems they want to avoid.

HS: There´s really no way for us to know the extent to which the industry actually is self-regulatingâ€or if it´s happening at all. Because the names and chemical formulas of materials and their nano-scale counterparts are the sameâ€for example, graphite and nanotubes are both carbonâ€there has been a false assumption on the part of industry and government that they could be treated the same in terms of regulation. Researchers and product developers, on the other hand, were well aware that they were dealing with essentially different materials that have different structural properties and different behaviors. When we informally surveyed companies several years ago we found that some were requiring measures as simple as dust masks, while other companies were treating nanoparticles as hazardous materials. Recently, there has been a shift in attitude and awarenessâ€industry and governments are belatedly recognizing that the lack of information about toxicological risks is a problemâ€and today there’s growing recognition that regulations are needed.

**BASED ON WHAT WE DO KNOW ABOUT THE INDUSTRY, HOW SHOULD NANOTECH BE REGULATED? **
**

CP:** That´s a huge debate going on right now. For one thing, the U.S. and Europe haven´t even agreed to a fundamental approach to regulation: in Europe, they tend to regulate from the process side, while in the U.S., regulations apply to the product side of the industry. Right now, in this country, we´re dealing mostly with â€passiveâ€ nano materialsâ€found in products like sunscreens and a special coating on baseball batsâ€and are trying to figure out whether we can get by with tweaks to existing legislation, or if we need new regulations altogether. As for â€activeâ€ nano-devices [such as the precision guided tumor killers featured in PopSci´s August issue], we don´t really think about those that much, since our systems aren´t set up to deal with them. However, there is still the potential for some crossover: any active nano-device that has a medical application, for example, will have to adhere to the standard medical regulations, which are plenty strict as is. In terms of less-regulated areas, like cosmetics, it´s more problematic.

HS: Regulations need to be mandatory and based on precautionary principles. They need to provide for well-funded and comprehensive research into the health and environmental risks posed by nanoscale materials, while also considering issues related to control and ownership of the technology, and the enormous societal impact it will have on jobs, trade, and commodities. Our group also believes in the need for intergovernmental oversight in the form of an independent international body dedicated to assessing major new technologies.

CP: ** When you look at the list of risks, the workers ARE in much more danger than the consumer. The industry is trying to implement good practice rules, and surveys have already taking place so that a standardization of rules can happen, but it’s still in the early stages.

HS: It’s likely that the greatest risks involve free-engineered nanoparticlesâ€that is, those not embedded in a matrix. Therefore, whomever comes in contact with these materials, whether it be workers handling them in the manufacturing stage or consumers at the end stageâ€with cosmetics and sunscreens, for exampleâ€could be at risk. It also means that the release of nanoparticles into the environment should be prohibited.