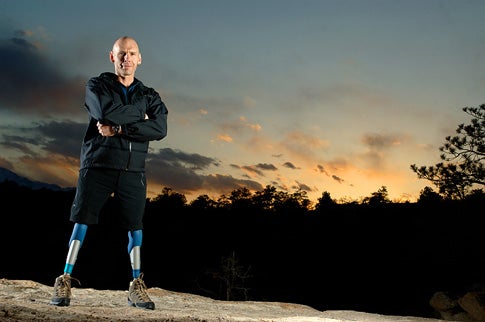 Today´s most driven disabled athletes are revolutionizing prosthetics by turning their limbs into sport-specific power tools. From hands shaped like ice axes to blade runners for feet, these prostheses are smarter, lighter, stronger and sexier than ever before. And talk about extreme athletes-the men and women using them have overcome enormous physical challenges to climb the world´s tallest mountains, cross finish lines with record speeds, and change the world´s perception of what´s possible.

After having both legs amputated at mid-thigh,** Warren Macdonald** knew he would have to invent a way to continue mountain climbing. With the mere six inches of natural femur he had left on each leg, it was impossible for him to effectively maneuver full-length prosthetic legs up rock faces. So he and Hanger Prosthetics designed miniature, carbon-fiber climbing legs to purposely keep his center of gravity low, thus making it possible to power the prostheses around technical maneuvers. The legs are spring-loaded, with three settings for shock-absorption to withstand jolts. The team also designed coordinating, one-of-a-kind climbing feet that consist of cut-down Vibram boot soles with a rotator, so Macdonald can place the rubber-coated feet into small crags and footholds. Standing only 4 feet 4 on his climbing legs, Macdonald is the first double-leg amputee to summit Africa´s tallest peak, 19,563-foot Kilimanjaro, and scale the longest vertical rock face in the U.S., Yosemite´s El Capitan. Next, Macdonald plans to climb Mount Kenya, knocking off Africa´s second highest mountain. (partanimal.com)

Aron Ralston received national attention in 2003 for courageously self-amputating his arm below the elbow after a boulder fell on it, pinning him for five days inside Utah´s Blue John Canyon. Since then, the 30-year-old Colorado-based mountaineer has become the first person to solo climb all 59 of his state´s 14,000-foot peaks in winter. He also recently summitted South America´s tallest mountain, 23,000-foot Mount Aconcagua-all without the use of his dominant arm. In its place, Ralston wears a specially modified arm made by Hanger, a leading prosthetics company in Maryland. Hanger added sticky rubber to the arm so Ralston could keep friction against the rock, and a harness system to assist in the bent-elbow positioning important for climbing. Ralston then worked with Boulder-based prosthetic company, TRS, to develop one-of-a-kind hand units that plug into and release from the arm with the push of a button. For mountaineering and ice climbing, Ralston uses an ice ax attachment consisting of an aluminum shaft and chrome-molded ice climbing tools. More recently, Ralston designed a hand-unit device made with mixed climbing components and coated in urethane specifically for rubbing against rock. Though both were designed to help Ralston up mountains, neither tool is mechanical-they are static, body powered devices he must swing and place the whole way up. (aralston.com)

Will Craig, a single-arm amputee and Vancouver-based doctor, paired his knowledge of the human body with his passion for mountain biking to create the first technical riding arm for his sport. The system consists of three components: an arm, hand, and tool bracket that function as a complete natural limb. Made from titanium alloy, the ARM can flex, extend, rotate, and adjust to varying angles depending on the rider´s incline. Craig´s patented Fox Racing Shox compression elbow absorbs jolts as a natural elbow would, minimizing impact to the shoulder. The tool bracket acts like human fingers to securely clamp down on the handle bars. With this system, Craig is able to ride Vancouver´s most technical trails, carving turns, jumping, and even launching with precision and control otherwise unattainable. (prostheticarm.com)

Until Jarem Frye became the first in the world to do it in 1996, it was considered impossible for above-knee leg amputees to telemark ski. But for the past 10 years, Frye has been developing sophisticated knee-joint prosthetics that allow him to do not only that, but also surf, bike, climb, wakeboard and excel at myriad other sports that require advanced knee articulation. Last year, Frye founded Oregon-based Symbiotechs to market his brainchild, the XT9 knee. Constructed from aircraft-grade titanium, the XT9 is corrosion-resistant for use in extreme conditions including snow, ice, and water. Frye´s patented shock component serves as the amputee´s missing thigh muscle to absorb impact. It´s fully adjustable to a person´s weight and intensity level, as well as the designated activity and terrain. (symbiotechsusa.com)