What is the most powerful laser in the world? 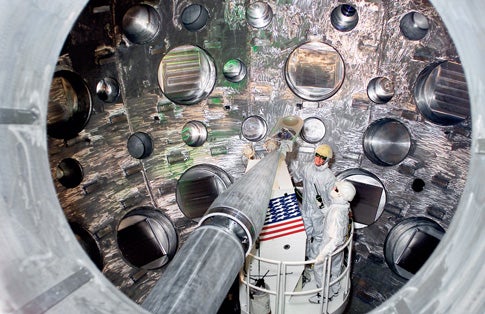 Inside the target chamber of a 500-trillion-watt laser

When it reaches full operation in 2009, the National Ignition Facil-ity (NIF) beamline will put other, piffling lab lasers to shame. The NIF system will be 60 times as energetic as Nova (which generated 16 trillion watts), NIF´s predecessor at Lawrence Livermore National Laboratory and the previous record holder. But achieving such intensity won´t come easy. The hardware and electronics that power the NIF laser require a space bigger than a football stadium.

Now, for the numbers that make
the hearts of laser nerds sing. On final approach, 192 laser beams will zing into a million-pound target chamber
33 feet in diameter, with 20-inch walls. To prevent any radiation from escaping, the chamber is encased by
walls that are six feet thick. Each
20-nanosecond laser burst will blast target materials in the chamber with 500 trillion watts of power-1,000 times the electrical output of the entire U.S. over the same period of time. All that awesome power will be used in fusion research, in astrophysics (for example, studying what conditions might be like at the center of Jupiter), and in generating thermonuclear detonations for weapons research.