My brother and I have a bet: Would it be possible to blow up Mars? 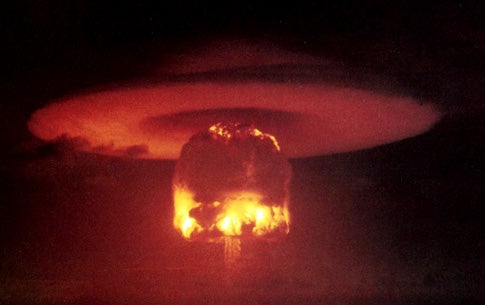 In a word: no. It would be impossible to destroy the Red Planet with any device scientists can build, let alone finance. Planets can survive enormous assaults; the Hellas Basin, a Martian crater about 1,300 miles wide, testifies to the planet having once collided with an asteroid so massive that the impact generated well over a hundred million megatons of energy. If a meteoroid that size were to hit Earth, it could wipe out life on an entire continent. In contrast, the most powerful nuclear weapon ever tested, Russia´s â€Tsar Bomba,â€ had a yield of only 50 megatons, and most countries´ nuclear arsenals consist of bombs in the range of 200 kilotons to 400 kilotons-in planetary-impact terms, the equivalent of party poppers. Faced with an object as robust as a planet, there is no way a nuke-or all nukes-would work. And even the mightiest of meteorite impacts haven´t destroyed Mars or the Earth, explains planetary scientist Edward Scott of the University of Hawaii. â€The amount of energy
needed is so preposterous that it could never happen.â€

But what if we could build a radically more powerful weapon, one that would unleash, say, a billion billion megatons-roughly the amount of energy the sun produces in a month? According to planetologist Gary Peterson of San Diego State University, the strength of the gravitational field that Mars´s mass creates would render even this colossal effort a failure. â€You could have the biggest explosion possible, one that would tear the planet apart, but the pieces of rock would just clump right back together again,â€ he says. A more realistic and productive endeavor for nukes in space, he adds, would be finding a way to pulverize smaller asteroids flying too close to Earth for comfort.