Is It Raining Aliens?

Nearly 50 tons of mysterious red particles showered India in 2001. Now the race is on to figure out what the heck they are 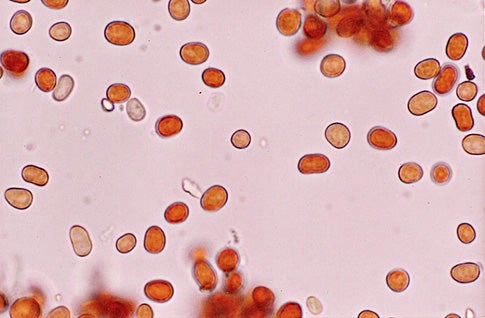 E.T. Under the Microscope: Scientists have yet to identify the unusual particles [above, magnified 500 times] isolated from India´s mysterious red rainwater.

As bizarre as it may seem, the sample jars brimming with cloudy, reddish rainwater in Godfrey Louis´s laboratory in southern India may hold, well, aliens. In April, Louis, a solid-state physicist at Mahatma Gandhi University, published a paper
in the prestigious peer-reviewed journal Astrophysics and Space Science in which he hypothesizes that the samples-water taken from the mysterious blood-colored showers that fell sporadically across Louis´s home state of Kerala in the summer of 2001-contain microbes from outer space.

Specifically, Louis has isolated strange, thick-walled, red-tinted cell-like structures about 10 microns in size. Stranger still, dozens of his experiments suggest that the particles may lack DNA yet still reproduce plentifully, even in water superheated to nearly 600