Our contributing troubadour, Jonathan Coulton, talks to the movers and shakers of sci-tech. From the moon. 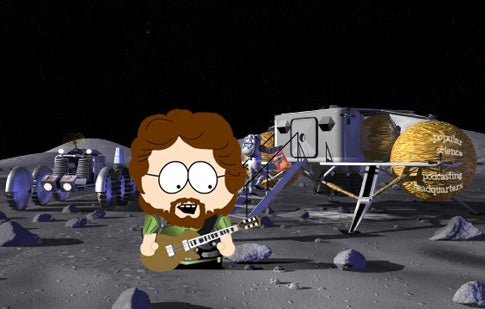 Art by Jonathon Riley, with Janina Koppel and NASA

What’s a podcast? Simply put, a podcast is a multimedia file that can be downloaded to your MP3 player or computer. PopSci’s podcasts are like little variety shows, complete with music, informative interviews, and sometimes even photos and video. Each week, we’ll talk to experts about the stories shaping the future of technology, from the frontlines of the “wired” war in Iraq to San Francisco’s plan to turn dog droppings into electricity–and everything in between.

Who´s this Coulton guy, and why does he have such a funny title? Our podcaster is an ace interviewer, a comedic tour de force and an accomplished singerâ€songwriter, best known for stirring ballads like â€Womb With a Viewâ€ and catchy rock ditties like â€Code Monkey.”

How do I get started? To subscribe to our podcast in iTunes, simply click the purple “iTunes Link” icon. If you use another program to download podcasts, paste in the link to our RSS feed to subscribe. Or you can click the “Download MP3” icon for a direct link to the audio file.

In the future, will everyone have photographic memories? Gordon Bell discusses his quest to digitally capture all the events of his life for a project called MyLifeBits. He predicts that advances in miniaturization and data storage will soon allow us all to have total recall.

How wired is the U.S. military, really? In this week’s episode, writers Noah Shachtman and David Axe discuss the challenges of fighting the first networked war.

Could India´s red rains have been caused byâ€ aliens?

Is there an end in sight to free Internet as we know it? Yes-if Big Telecomm has its way.

An inside look at San Francisco´s plan to turn waste methane, from dog droppings, into a viable source of energy.

PopSci photographer and DIY madman John Carnett explains how he built a rolling LCD projector for his backyard.

In this episode of the PopSci podcast, Jonathan Coulton talks to writer Rebecca Skloot about a curious aspect of intellectual-property law: patents that could make it illegal to talk about medical conditions you already have.

Episode 10: The Smell of War

Hear how the U.S. military is prepping soldiers for war with simulations of the noxious odors of combat.

Meet the Belgian brainiac behind the world’s first robot roaches, designed to lead pesky bugs out of hiding-and your apartment building.

Episode 12: Grow Your Own Organs

Episode 14: Are We Getting Safer?

Jonathan Coulton finds out just how much homeland security tech has improved since 9-11.

Episode 15: The Future of Robots

Will robots have human intelligence by 2029? Coulton talks with big-thinking futurist Ray Kurzweil about his surprising prediction

Episode 16: Coulton Gets a Second Life

Jonathan Coulton enters a virtual world and learns what it’s like to be schizophrenic.

Can high-tech metamaterials make one of science’s most far-flung fantasies a reality?

Erich Jarvis is breaking new ground in the study of human language. His learning tool of choice? Zebra finches.

A nuclear reactor at sea: Worst idea ever?

Funnyman John Hodgman (of “Daily Show” fame) visits Lunar Base One and talks…lobsters.

What made a swarm of yellow jackets in Alabama build an enormous nest inside a ’55 Chevy pickup truck?

Jonathan gets down with Mike Anderson, one of the MIT students behind the LED-powered homemade disco floor