How to make a lasting memento of your dead self 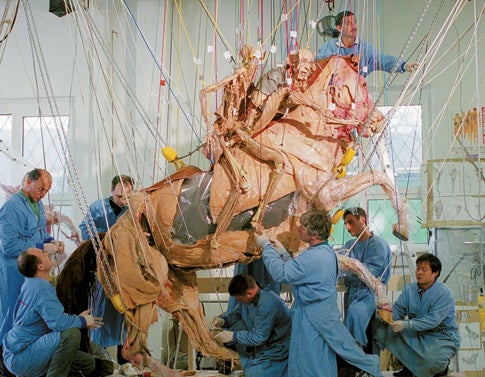 by Courtesy Institute for Plastination

**Q: I read your story in February’s issue about preserving the deceased as a gem. Is there another way to preserve myself for the ages?

A: You could donate yourself to Body Worlds**, a group that exhibits mortal remains in a traveling show of anatomical wonders. Body Worlds is managed by the Institute for Plastination, which was founded by German medical researcher Gunther von Hagens, who invented the plastination process 30 years ago in an effort to improve the study of human anatomy.

Plastination replaces bodily fluids with a clear polymer that hardens gradually so that anatomists can pose the bodies after they are preserved. The popularity of such exhibits, which rake in millions of dollars a year, has had other companies jumping on the bandwagon, al-
though Body Worlds is the only group to get its bodies strictly through a donation process. (Its largest competitor, â€Bodies: The Exhibition,â€ receives plastinated cadavers from a facility in China. A spokesperson for that exhibit was unable to say how the facility acquires its cadavers.) After someone dies, it´s a journey of about 15 months from funeral home to exhibition hall-beginning with the acquisition of the cadaver, to dissection, to plastination.

The waiting list is long-6,500 still-living people have donated themselves to the organization, and 300 bodies are in the works-and the Institute can´t guarantee that your cadaver will end up in an exhibition. Happily for those with less-than-perfect forms, the minds behind Body Worlds want a variety of specimens. Part of the educational aim of the exhibit is to teach people how the body heals and how disease ravages internal organs. Bodies with healed broken limbs are included, as well as lung-cancer patients and obese people. Think your hide can make the grade? Download a donation application at bodyworlds.com.