Can tinfoil hats actually prevent the government from reading your thoughts? 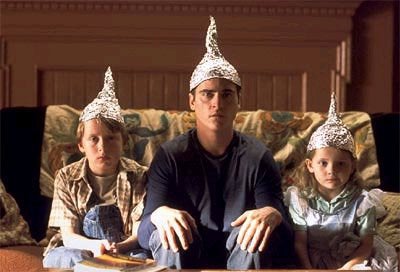 Conspiracy theorists, beware: That aluminum foil beanie-headwear believed, since at least the 1950s, to stop brain-control rays-may make it easier for The Man to read your mind, according to Massachusetts Institute of Technology grad students. Inspired by fringe beliefs that invasive radio signals can probe citizens’ thoughts and that wearing foil on your head may fend them off, an experiment by four Ph.D. candidates found that certain key frequencies-owned by the Feds, naturally-are actually enhanced by such “protection.”

The students first recorded a baseline transmission from a radio-frequency spectrum analyzer, a device that emits radio waves of various frequencies, to its receiver antenna, located on four test subjects’ bare noggins. Then they performed the same measurements- sweeping from 10 kilohertz to 3 gigahertz-while the subjects wore one of three double-layered foil helmets: the “classical” (foil hood wrapped close to the head), the “fez” (cylindrical, flat-topped hat) and the “centurion” (conical shape with a peak). The antenna, a stumpy plastic-coated stub, was fitted between the helmet and the subject’s cranium to determine how much of a signal was absorbed or deflected before reaching the brain.

What started strictly as “a desire to play with some expensive equipment” ended with surprising results, says lead study author Ali Rahimi, a recent graduate of MIT’s doctoral program in electrical engineering and computer science. Overall, the foil effectively weakened radio waves by up to 10 decibels over most of the frequency spectrum (there were no significant differences among helmet shapes). But at 1.2 and 2.6 GHz-which fall within the band reserved for government satellites, GPS systems and mobile phone corporations-passage through the foil amplified these waves by 20 to 30 decibels. Although Rahimi doesn’t know why the foil increases only those frequencies-antenna design is a “black art,” he says-the implications of the research were clear. “It requires no stretch of the imagination to conclude that the current helmet craze is likely to have been propagated by the
Government, possibly with the involvement of the FCC,” the students sagely declared. “If there are radio waves involved in reading minds, aluminum hats aren’t an effective way to counteract them.”