If cultured fish is fed with wild stock, are we doing more harm than good when we buy fresh from the farm? 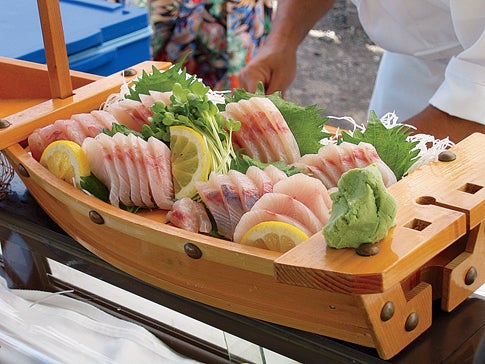 The fact that nearly three quarters of the world’s fisheries are dangerously close to depletion makes aquaculture seem like our only chance at meeting the ever-growing demand for seafood. But it takes fish to grow fish: Most of the fish meal used in today’s aquaculture feed is made from small, oily specimens such as anchovies and sardines. A huge load of these “forage” fish-roughly a third of the global catch-is turned into fish meal every year. The Pew Ocean Commission estimates that it takes four pounds of wild fish to produce one pound of farmed fish. So what’s the deal?

“This is a highly sensitive issue, one we’re working on all the time,” says Mike Wink, CEO of Kona Blue Water Farms, located off the Big Island of Hawaii. According to Wink’s calculations, it takes between two and two and a half pounds of wild fish to raise one pound of his company’s “Kona Kampachi.” Kona Blue raises its sushi-quality Kampachi on a diet of special pellet feed, about half of which consists of fishmeal, the other half vegetable-based protein. Because the anchovies used to make the feed are sustainably fished off the coast of Peru, Wink says, Kona Blue is able to farm without depleting wild populations.

But for conservationists like Michael Hirshfield, chief scientist at the nonprofit advocacy group Oceana, Wink’s “single-species mindset” is cause for concern. “A lot of people are under the impression that, as long as we’re careful not to completely wipe out the wild populations, we’re operating sustainably,” he says. “But they’re called forage fish for a reason-hundreds of other animals, from whales to seabirds, also count them as a food source. When we take these species from the ocean, we’re potentially affecting entire food chains in ways we don’t understand.”

And although Hirshfield applauds aquaculture’s ongoing efforts to increase the percentage of soy- and vegetable-based proteins in its feeds, he questions whether a fishmeal-free feed will yield the results fish farmers seek. “You can only go so far in turning tigers into vegetarians,” he says.

So why not just raise vegetarian fish? It’s a matter of taste. “Fish that are raised on algae or plant material have “swampier’ flavors,” says Charles Helsley, researcher emeritus at the University of Hawaii. “No one wants to eat carp when they can have salmon or tuna.”

But for Randy Cates, who believes the “feed problem” is largely misunderstood, the real issue is economics. About two thirds of the fish meal produced annually is used to make chicken, pig and cattle feed. “When you compare fish to alternative protein sources, fish win hands down,” he says, adding that, pound for pound, cows consume several times as much protein as fish before they’re ready for market. He also argues that the development of alternative feeds will cause feed costs to skyrocket, ultimately raising market prices so that only the rich will be able to afford to eat fish. “In nature, chickens and cows don’t eat fish,” he says. “Fish eat fish. What it comes down to is finding the best way to use our resources.”

Where can I buy OOA fish?

No matter where you come down on the politics of offshore aquaculture, the industry’s state of infancy means that the fish aren’t yet widely available (there are only three offshore farms currently serving the U.S.). The Bahamas’ barely-off-the-ground Snapperfarm Inc. has been working with a Miami-based distributor to supply cobia to restaurants in Florida and New York, but the farm recently put its harvesting operation on hold to allow hatchery stocks time to replenish. And although Randy Cates’s moi is now for sale throughout Hawaii at mainstream grocery chains such as Safeway and Costco, he doesn’t expect to begin regular exports to the mainland U.S. until he finishes expanding his Oahu-based farm. At present, only Kona Blue’s “Kona Kampachi” is obtainable nationwide. In addition to menu appearances at restaurants like the renowned Water Grill in Los Angeles, the sushi-quality Hawaiian yellowtail is available by the pound at kona-blue.com.