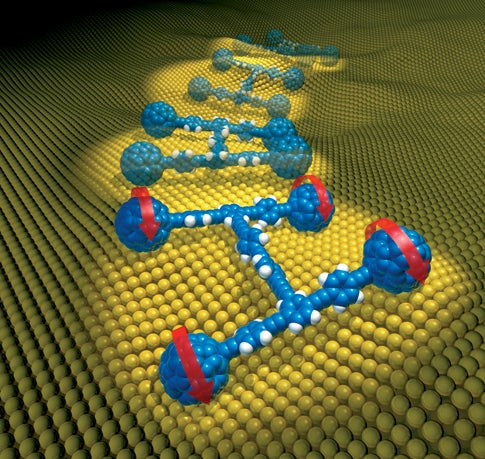 The most prolific car manufacturer on the planet resides in a Rice University laboratory in Houston, where chemist James Tour and his colleagues have built one trillion trillion nanoscopic cars. The tiny four-wheeled vehicles are only four billionths of a meter wide-25,000 of them parked side by side would be about as thick as a piece of paper. Not just another nano-gimmick, Tour´s cars could one day carve tiny channels in silicon, creating more-powerful computer chips.

Although other groups have made nanocars that slip or slide across a surface, Tour´s team is the first to construct ones with actual rolling wheels. To get the cars moving, scientists either heat an atomically smooth gold roadway (the temperature difference incites the wheels to spin) or use a scanning tunneling microscope to emit a beam of electrons that drags the car along by static electricity. In the future, Tour hopes to install an active propulsion system. What we want to do now is put an internal motor in there and drive the thing, he says.

Several different motors are in the works, including a photon-powered version [see illustration below]. Tour is also fine-tuning new 2006 models, including a nanotruck capable of transporting molecules, such as oxygen. Before long, he says, we´ll have a little Daytona 500.