Scientists invent super-smooth, super-small pipes that could ferry medicine into the body 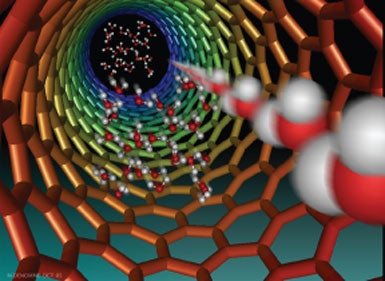 Scientists at the University of Kentucky have built tiny pipes that move water 10,000 times as fast as the conventional laws of fluid flow allow, mimicking for the first time the seamless way fluids progress through our cells. They´ve also found a way to control which molecules can pass through the pipes, a discovery that could yield safer, more efficient skin patches to deliver medicine into the body. The pipes are made of carbon nanotubes, thin sheets of graphite rolled into cylinders just seven billionths of a meter in diameter. The scientists poured a polymer between them to create a fine membrane that can embed 65 billion pipes per square inch. Lead researcher Bruce Hinds attributes the tremendous speed of the water flow (3.3 feet a second) to the nearly friction-free carbon nanotube walls. To keep out unwanted molecules, Hinds placed chemical receptors at the entrances to each tube, so that only those proteins that match the receptors are allowed passage.