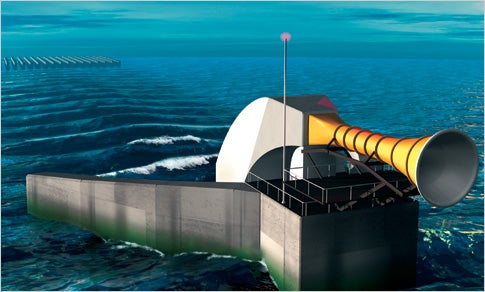 Big ocean swells could one day be as exciting to homeowners as they are to surfers, thanks to an innovative new device that harnesses the power of waves to produce cheap, clean electricity. Pioneered by scientists at Energetech, a small alternative-energy company in Randwick, Australia, a prototype of the $1.5-million device is now in testing off the Australian coast, and Energetech hopes to build another one near Rhode Island by 2007. Moored several miles offshore, Energetech’s 40-foot-tall rig relies on the up-and-down motion of waves to force air in and out of a chamber, turning a turbine that produces electricity. The company’s president, Tom Engelsman, says that a full-scale unit could power up to 5,000 homes; the output depends on the size and regularity of the swells. But recent theoretical work of two Chinese scientists on amplifying wave energy could soon make devices like Energetech’s even more effective.

Step 1: Enhance Waves
The height of a wave increases as it moves into shallower water-that’s why waves get steeper as they approach the sand. According to scientists Xinhua Hu of Iowa State University and Che Ting Chan of the Hong Kong University of Science and Technology, a football-field-size array of solid columns, situated some 300 feet from the rig, could effectively act as a false ocean bottom. The part of the wave that flows through the columns would behave as if it had reached the shallows, doubling in height.

Step 2: Corral the Swells
The cylinders amplify only the part of the wave headed straight for the converter, so there’s no danger to beachgoers. As the wave enters the Energetech converter, the parabolic wall increases its height and further focuses its energy.

Step 3: Turn the Turbine
When the trough of the wave passes beneath the chamber, air is sucked downward [see diagram,facing page]. Then, as its peak rolls through, air is forced back up, spinning the turbine faster. Bigger waves mean more airflow and, according to Engelsman, “The more air you pump through, the more energy you get.”

Step 4: Light up The Mainland
A generator converts the mechanical energy of the spinning turbine into electricity, which flows by way of an underground cable to a power station that hooks up to the main grid onshore. If the Rhode Island project is approved, it will produce two megawatts of power a year, enough to power 1,200 homes.