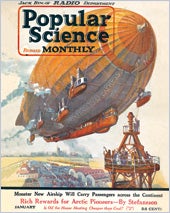 “A large portion of the people in the United States will soon be flying in dirigibles,” an Army official told Popular Science as construction on the Navy´s ZR-1-considered a sure forerunner of even bigger, purely commercial airships-neared completion. Expected to rival trains for comfort and airplanes for speed, the vessels would be kept aloft by helium, making them safer than their hydrogen-filled predecessors. Unfortunately, Depression-era financial constraints and the public´s loss of faith after the 1937 Hindenburg disaster grounded passenger blimps for the rest of the century. But now there´s a new craft on the horizon, which, dare we say, just might be tomorrow´s airliner.

Designed to provide film studios with sunshine on demand, this lamp mea-sured one foot in diameter, making it the largest lightbulb in the world. The 30,000-watt monster consumed a third the amount of power required to run a trolley car and contained enough tungsten filament to illuminate 55,000 household lamps.

New Orleans officials proposed a 6,000-foot-wide spillway to prevent Mississippi River flooding from drowning the city. The $4-million undertaking never materialized, although a similar project was completed after the Great Flood of 1927 drove 700,000 Southerners from their homes.