I’ve heard that the Y chromosome is doomed. Are men on the way out?

Female world domination isn’t on the horizon just yet, at least from a genetic standpoint. Nearly a decade has passed... 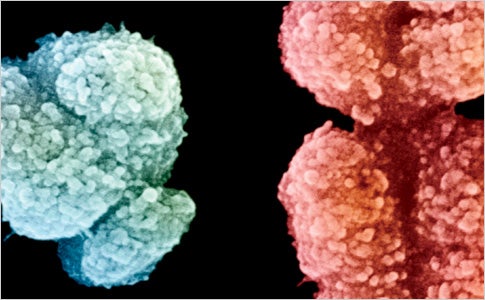 Female world domination isn’t on the horizon just yet, at least from a genetic standpoint. Nearly a decade has passed since scientists first pre-dicted the demise of the human Y chromosome, that sliver of DNA that makes a man a man. But the recent decoding of the chimpanzee genome indicates that the Y chromosome is safe. And monogamy could be the reason.

First, a primer. Humans store their genes in 23 pairs of chromosomes, 22 of which are identically matched. The 23rd is a two-sided biological coin-twin X’s mean you’re female; an X and a Y, male. Chromosome pairs often trade bits of DNA in a process called recombination, the purpose of which is to keep genes functional.

Talk of men’s path toward extinction began in the late 1990s, when it was discovered that the human Y chromosome, which is stumpy compared with the X, does not share enough genetic material with the X to practice recombination. Left without a way to renew damaged genes, the Y would continue to degrade and would event-ually disappear, geneticists announced. They slapped an expiration date on the male half of the species of sometime in the next 5 to 10 million years.

Because humans and chimpanzees shared a common ancestor six million years ago, geneticist David Page of the Whitehead Institute in Cambridge, Massachusetts, studied how the chimp Y chromosome and its human Y counterpart have evolved differently in the intervening years. What he found surprised him: The chimp Y chromosome is far more degraded than the human Y chromosome.

Page and his colleagues speculate that chimps’ promiscuity-females mate with multiple partners-has led to enhancement of the Y genes that produce sperm. Among chimps, “there are sperm wars going on. Each male is trying to pass his own genes down,” says Jennifer Hughes, who co-authored the study, published last September in Nature. Neglected, the chimp Y
chromosome’s nonreproductive genes have declined.

Further, the degradation of the chimp Y reveals something relevant to humans. The Whitehead Institute scientists think that although the human Y chromosome also lost genes at first, in recent aeons it has been relatively stable. The human Y has eluded the chimp Y’s fate, they suggest, because humans are largely monogamous. Human sperm don’t face the same competition as chimps’, so there isn’t as much pressure on the human Y to produce good sperm.

Not all geneticists are convinced that the human Y has stopped deteriorating. Jenny A. Marshall Graves of the Australian National University in Canberra, for one, still believes that the chromosome’s days are numbered. “The human Y has been degenerating since it was born, 300 million years ago,” she says. And so the controversy continues. Rest assured, though, the Y-and the guys-will be around for a while.