Getting the Lead Out 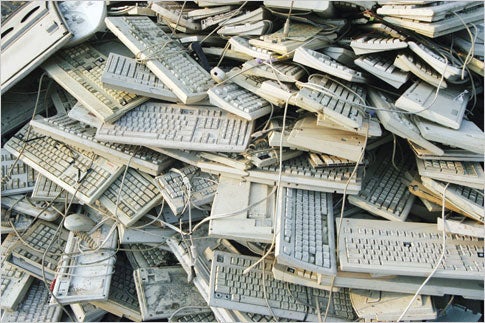 Junked motherboards and keyboards like these contribute to the 20 to 50 million tons of electronic equipment discarded globally every year. Europe´s legislative attack on e-waste aims to make new electronics safer for the environment.

The life-cycle interval between innovation and obsolescence is notori-ously short for many electronics, as parodied by a recent Saturday Night Live skit that portrayed Steve Jobs introducing new versions of the iPod every few seconds. But the ever-growing mountain of discarded cellphones, computers, TVs, MP3 players and other equipment is no joke. The U.S. alone produces more than two million tons of e-waste a year, and 90 percent of it ends up in landfills, where it can potentially leach toxins into groundwater or emit carcinogens when burned.

Tough legislation scheduled to take effect in Europe this July could help dramatically curb the problem. The Restric-
tion of Hazardous Substances Directive, or RoHS, as the mandate is known, will force companies to eliminate nearly all of the hazardous substances-including lead, mercury, cadmium and two forms of flame retardant-found in new electronics manufactured or sold in the European Union. The directive is also expected to have serious implications for the rest of the world, since most manufacturers and suppliers will make their entire product lines RoHS-compliant, instead of producing a “clean”version for Europe and a “dirty”version for everyone else.

“My example is: We used to make plain white vanilla cake,”says Ray Moskaluk, the RoHS-compliance program manager for Hewlett Packard. “And we all had the same recipe. Now we´re going to make carrot cake. Carrot cake is still cake, but it´s a different recipe. And that´s requiring us to learn and understand.”The biggest challenge in the transition, industry experts agree, will be weaning the companies off lead.

Tin-lead alloy, the industry standard for soldering, is prized for its relatively low melting point of 361