Hot off the presses: Highlights from the world's biggest science conference 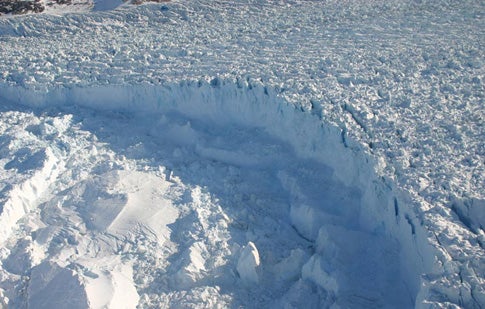 The additional fresh water deposited into the north Atlantic by Greenland’s melting ice sheet [above, the Helheim Glacier] might shut down the North Atlantic Current within the next 100 years.

The annual American Association for the Advancement of Science conference covers arguably the greatest variety of subjects of any science conference in the world. This year’s gathering, held in St. Louis, Missouri, hosted symposia on everything from astrobiology to veterinary ethics. And although it’s impossible for one reporter to cover more than a small fraction of the 200-plus scientific sessions held over five days, here are a few highlights of the most exciting research happening now. You can find further information at the AAAS Web site.

Scott Gallagher, a biologist with the Woods Hole Oceanographic Institution, talked about the coming paradigm shift in experimental ocean science. Whereas before marine biologists had to make brief expeditions, taking a snapshot of a small part of the ocean, new semi-permanent sensor networks will continuously monitor the world’s oceans for years at a time. Gallagher also mentioned that these networks will send real-time data and video to anyone who wishes to view it. One project can be found here.

During a press conference about the future potential of stem-cell research in the U.S., the strain on the field caused by the political debate surrounding the subject was clear. While most researchers spoke excitedly about the wide-reaching therapeutic potential of their work, William Hurlbut, a member of the President´s Council on Bioethics, cautioned that the social divisions created by the ethical debate over this research are unsustainable. Translation: Find a way to get your stem cells without destroying embryos, fellas.

There are now three broad varieties of scientists, or so I learned at a symposium on the application of computer science to the rest of science: theorists, experimentalists and computationalists. The last group comprises the large and growing numbers of scientists who use computer power to help solve mysteries in a given scientific field (for example, the scientists who create computer models of supernovae to understand how they ignite). As computer scientist Bernard Chazelle of Princeton University put it, “In the 20th century, you had the science of the formula. Being a scientist was coming up with a formula and matching it with other formulas. In the 21st century, we will have the science of the algorithm.”

Astronomer Margaret Trumbull of the Carnegie Institute of Washington came up with two lists: one consisting of the nearby stars most likely to hold intelligent life, the other of the nearby stars most likely to harbor an Earth-like planet. She believes we should study the first with SETI radio telescopes, the second with next-generation space telescopes powerful enough to see those planets through the glare of their parent stars. Unfortunately, though, funding for the Terrestrial Planet Finder, just such a telescope, was recently slashed. Indeed, the proposed NASA space science budget for 2007 is down 15 percent from 2005. The astrobiology budget is down by 50 percent in that same time frame. Wanna see E.T. before 2050? Write your representative.

The Day after Tomorrow‘s exaggerations aside, global warming could really cause a disruption in the North Atlantic current, the flow that brings heat up from the tropics-and that could have potentially disastrous consequences. This was the message from Stefan Rahmstorf of the Potsdam Institute for Climate Impact Research in Germany. If enough ice melts in Greenland, we could see a shutdown of the current in the next century. And although it wouldn’t plunge us into an ice age, Atlantic sea levels could rise by up to a meter in its wake. Unfortunately, this might already be happening: A NASA report presented earlier at the conference found that Greenland ice loss has doubled in the past decade.