The End of Road Salt? 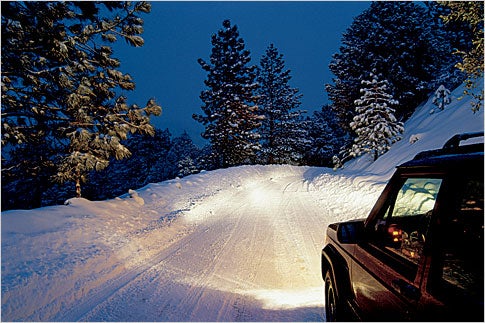 The Wolf River Bridge in Crandon, Wisconsin, was once notorious for its treacherously slick pavement, which caused several accidents every winter. Workers routinely applied rock salt, but traffic quickly wore it away. So the city turned to civil engineer Russ Alger for help. Alger, director of Michigan Tech University´s Institute of Snow Research, has invented a permanent road sealant designed to dramatically lower the road´s freezing temperature and make common de-icing chemicals, such as magnesium chloride, stick to the pavement for up to a month-,about 10 times as long as they normally would. Not a single accident has been recorded since workers applied the solution two years ago. Now licensed by Cargill, Inc., in Wayzata, Minnesota, the technology makes its commercial debut this winter on six roadways across the snowbelt, including those in New York and Indiana.

The sealant, called SafeLane, is a mixture of dolomitic limestone (a rock rich in magnesium and calcium) and epoxy resin. It contains sponge-like pores that act as tiny reservoirs, trapping de-icing chemicals and making it difficult to plow them away. One coating lasts up to 20 years and can reduce the use of magnesium chloride by 75 percent and eliminate the need for rock salt altogether. This saves your car and the environment from the corrosive effects of chloride-based chemicals.