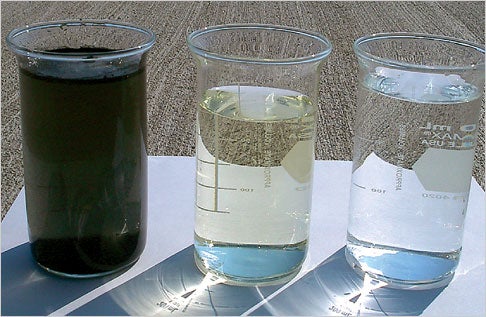 If the U.S. Army’s LATEST field tests pan out, its future transport vehicle will be almost as self-sustaining as a space station, enabling soldiers to survive for at least three days without supply-line support. One crucial tactical advantage over an entrenched enemy would be to make drinking water out of engine exhaust. Connecticut-based Hamilton Sundstrand, manufacturer of NASA life-support systems, along with Kentucky-based company LexCarb, has just outfitted two Humvees with 500 pounds of specialized machinery that not only recovers the water vapor naturally produced as a combustion waste product, but also makes it as clean as the water you draw from your tap.

At the core is a heavy-duty carbon filter bed, engineered by LexCarb, that filters toxins from the exhaust stream and delivers condensed water vapor to a five-gallon water tank at the truck’s rear. The $2 million spent on the two prototype systems, currently undergoing testing at the Aberdeen Proving Ground in Maryland, makes the price of Perrier seem cheap by comparison. But, as Hamilton Sundstrand vice president Ed Francis points out, there’s incalculable battlefield value to “the concept that you’ve carried in your water if you’ve carried in your fuel.”

1. CATALYTIC CONVERTER
Hamilton Sundstrand has modified a conventional catalytic converter, the device in all modern vehicles that oxidizes the toxic organic compounds not combusted by the engine. The converter has a larger surface area so that fumes take longer to pass through its honeycomb structure-and get cleaner in the process.

2. HEAT EXCHANGER
The heat exchanger refrigerates the engine fumes to make the water vapor condense and collect in a receiving tank. This process separates the water from the carbon dioxide in the raw exhaust.

3. TREATMENT TANKS
The pump sends water through a bed of six activated-carbon and ion-exchange filters. The water is black before it begins the filtration process and clear by the end.

4. WATER-QUALITY SENSOR
The purification system monitors for filtration failure by continuously testing the conductivity of the water (which changes with the removal of toxins). Filters typically must be replaced after the system runs through a maximum of 75 gallons of water.

5. STORAGE TANK
After the system adds a chlorine solution to prevent bacteria and algae buildup, it collects the water in a five-gallon storage tank at the right rear of the vehicle, where soldiers draw it from a spigot.
A second pump-driven spigot in the vehicle cabin draws water from the tank back through the air-conditioning unit, chilling it to decrease the chlorinated taste.