Your Personal Jet Is Ready for Takeoff 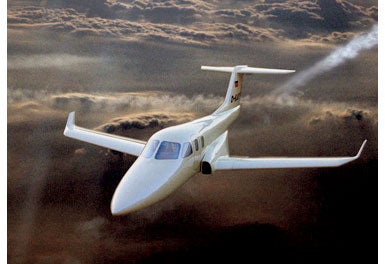 Tired of flying coach? Good news: Three airplanes being test-flown this year promise to bring ultra-convenient private jet transport to the masses. New technologies-including more efficient manufacturing systems, high-tech digital avionics, and lighter, more powerful engines-have enabled designers to build so-called microjets that can fly up to six passengers at hundreds of miles an hour, at a cost of as little as $1 million. (In comparison, Cessna’s entry-level private jet, the CJ1, costs about $4.2 million.)

If that’s too steep for your private hangar, don’t worry-you should still get the opportunity to fly in these craft. Air-taxi companies will use the jets for on-demand travel to local and regional airports nationwide, thereby avoiding the congestion of major hubs and delivering you closer to your destination.

Bargain-basement manufacturing and operation costs should allow small-plane passengers to enjoy all the convenience of a private jet-any airport, anytime, no lines, no check-in-
for the price of a business-class airline ticket or cheaper. DayJet in Delray Beach, Florida, has ordered 239 Eclipse 500s, made by Eclipse Aviation in Albuquerque, and plans to launch service next spring.

The only drawback is privacy, or lack thereof. With the cabin space of a large sedan, these aircraft have little room for fancy extras, such as lavatory doors. The toilet in Cessna’s Citation Mustang is separated from the cabin by a mere curtain. Austrian-based Diamond Aircraft Industries, makers of the five-seater D-Jet, may omit the bathroom altogether. Our advice: Leave your modesty, and your coffee, on the ground. Here, a look at three new microjets to come.

The Company: Eclipse CEO Vern Raburn, a veteran of Microsoft, has raised more than $400 million in start-up funds and now has five prototypes being flight-tested.

The Time Frame:Commercial flights are expected next spring.

The Key Technology: The Integrated Garmin G1000 avionics digital display replaces most switches and dial gauges. This gives pilots better situational awareness by plotting out potential hazards on a map.

The Time Frame:Commercial flights should begin in 2006.

Diamond is smaller than Cessna but more established than Eclipse; the D-Jet is its first jet-powered model.

The Key Technology: Made from composites, as Formula One racing cars are, the D-Jet will be lighter, stronger and more aerodynamic than a comparable aircraft made of aluminum.

The Time Frame:Commercial flights are expected by 2007.