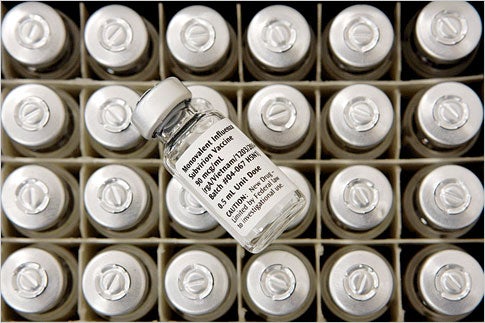 A few months AGO, when researchers analyzed the genome of the devastating 1918 influenza, they found it to be a direct descendant of a common bird-flu strain, with just a few disparate amino acids here and there. The finding cast a chilling new light on the most lethal modern bird flu, known as H5N1, which has already killed at least 70 people in Asia but isn’t transmissible between humans-yet. With just a bit of mutation, could H5N1 turn contagious and become the 21st century’s Black Plague?

It couldn’t if everyone were quickly vaccinated, and Purdue University
virologist Suresh Mittal wants to accomplish that with the help of a whole different germ. Mittal, the director of the school’s Laboratory of Gene Therapy, is using a $1.6-million government grant to develop a vaccine that hides key parts of the bird-flu genome in a harmless version of adenovirus, a common bug that normally causes
respiratory infections in children and adults. Administered through intra-muscular injection, the altered virus unleashes innocuous influenza genes inside the body and triggers the same immune response that a conventional flu vaccine would elicit.

The chief benefit of this method is time. Designing and producing a conventional flu vaccine takes at least six months. Using the adenovirus method, Mittal says, manufacturers could potentially produce enough vaccine for the entire country in as little as a month. The trick? No eggs. Traditional flu vaccines are grown inside fertilized eggs because the virus needs living tissue to replicate, and eggs are the most manageable medium. Yet making millions of doses of flu vaccine takes millions
of eggs, a logistical nightmare that causes manufacturing bottlenecks.

Mittal bypasses the eggs and grows the adenovirus-based vaccine in cell cultures, so a drug company could mass-manufacture it on short notice. Still, he has yet to conduct clinical trials, which means that his vaccine might not be ready for human use until October.

Meanwhile President George W. Bush has requested $7.1 billion in emergency funding, mainly to ramp up vaccine production. Two drug companies are now preparing more traditional vaccines against the lethal H5N1 strain. One version is already in human trials, but, like the adenovirus vaccine, neither of them are expected to be ready in time for this flu season.

Such a gap poses obvious problems. The U.S. Department of Health and Human Services estimates that a major flu pandemic in the U.S. could kill up to two million people. It is impossible to know whether the H5N1 strain will mutate into a form easily passed among humans, but if it does so this year, scientists fear that even Mittal’s method could fall short.