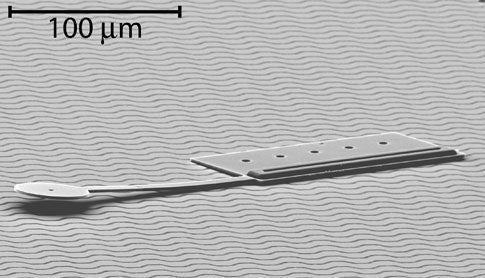 Dartmouth College researchers have created a robot so small that 200 of them could fit on the tip of your finger. The tiny machine crawls like an inchworm across a grid at the breakneck speed of 200 microns per second. Its goal: to fix really little things. Dartmouth engineer Bruce Donald says swarms of such devices could one day repair circuitry in computer chips.

Unlike other miniature robots-which contain bulky motors, hinged joints, wheels and batteries-the Dartmouth ‘bot is little more than a sliver of flexible silicon, two bits of memory, and two actuators that convert electrical energy into motion.

Donald uses a computer to ad-just electrical charges on the grid, thereby controlling its direction
and speed. When he increases the charge, an actuator on the machine’s tail becomes oppositely charged and thus attracted to the plate, causing the tail to flex and make contact with the grid’s surface. This pushes the shorter front leg 10 nanometers forward. At its fastest, the robot can take 20,000 steps a second. The next challenge is to assemble teams of robots to perform far more complex tasks, such as fixing your PC.