Katrina Hits NASA while It’s Down 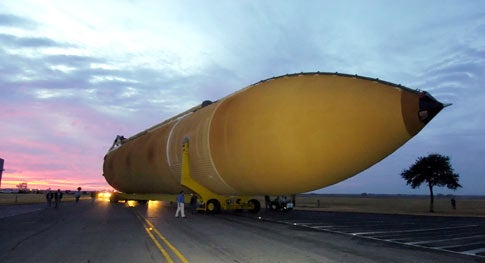 When Hurricane Katrina roared through the U.S. Gulf Coast on August 29, devastating New Orleans, it shut down a major NASA facility, bringing the space agency’s seemingly endless struggle to resume shuttle flights to a swift halt. The Michoud Assembly Facility, located about 15 miles east of the French Quarter, manufactures and repairs the space shuttle’s giant external fuel tank-the same tank whose shedding insulation led to the destruction of Columbia in February 2003 and grounded the shuttle fleet last July. Work had been under way at Michoud to fix the tanks to enable a hoped-for return to flight next March. But now the shuttle’s future seems more uncertain than ever. “We don’t have a schedule,” admitted Bill Gerstenmaier, NASA’s associate administrator for space operations, in a recent news conference.

The plant, and the external shuttle tanks stored inside, escaped serious damage, but hundreds of workers were rendered homeless and the plant was severed from the power, water and transportation networks it needs to operate. At first glance, said Bill Parsons, NASA’s senior official in charge of hurricane recovery, it looks like NASA will have to spend $1.1 billion to get Michoud, and nearby Stennis Space Center, back in shape. That figure includes building temporary housing for displaced workers. In the meantime, NASA will have to continue to rely on the Russian Space Agency’s Soyuz capsules to keep its crews in space.