The automotive world's most advanced technology is on display this week in Frankfurt. Popular Science gives you the VIP tour 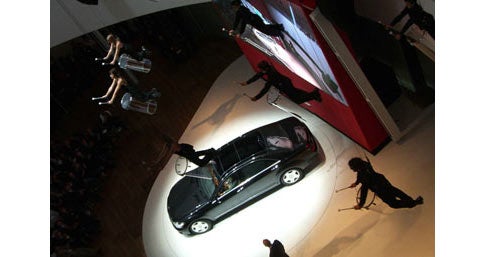 The Frankfurt Auto Show is one of the automotive worldâ€s biggest and most exciting events. Every year, manufacturers unveil their hottest new products and concepts in a dozen exhibit halls in eight different buildings. The media preview took place on September 12 and 13, and there was plenty to see.

Perhaps the most beautiful concept car at the show was the Citron C-SportLounge, an aerodynamically advanced touring car. Designers generated a drag coefficient of 0.26 in part through a reverse mobile airfoil under the structure at the rear of the vehicle. The cylinder-activated, three-position mechanism increases downforce and enhances vehicle stability at high speeds. It also sharply increases drag when braking to aid in emergency stopping. An exceptionally high-tech interior echoes the futuristic exterior styling nicely.

This outrageously cool concept melds motorcycle and racecar, using a modest four-cylinder, 170hp engine and superlight composite frame to yield terrific performance. The driver steers through the wide rear wheel while the passenger holds on for dear life.

Another wonderfully twisted concept from Peugeot is the Moovie, a rolling fishbowl of an urban commuter. A young Portuguese designer named Andre Costa won a design competition with the idea, and Peugeot helped him build a prototype. The wheels are the black rings that reach all the way to the roofline. It probably has a terrible rollover problem.

VW premiered its brand-new convertible coupe, the Eos, which sports a five-section glass retractable roof. It will hit the streets in the spring of 2006 in Europe and about a year later in the U.S. To protect occupants during a crash with the roof down, VW developed “head-thorax” airbags that unfold horizontally and vertically to cover the entire length of the side window. The concept for this car was first shown only 18 months ago, at the 2004 Geneva Auto Show.

Lexus unveiled the worldâ€s first luxury hybrid sedan, the GS450h. The rear-drive sedan uses a 3.5-liter direct-injection gas V6 coupled with a high-output electric motor to generate performance that is on par with a V8 but as efficient as a 2.0-liter, four-cylinder sedan.

Ferrari introduces this race-ready F430, a racetrack-only version of its award-winning new production car. For as little as $500,000, you can get not only the car but also a team of mechanics to get your car ready for a seasonâ€s worth of races in the Ferrari Challenge series.

Nice rear end-but the Superamerica looks good from any angle.

British legend Jaguar unleashed its new XK, a four-seat sports car with a 4.2-liter, 300hp V8 engine and a sequential-shift six-speed automatic gearbox. All-aluminum construction helps keep the weight down. The styling is understated and beautiful but too reminiscent of the new generation of Aston Martins.

Mercedes presented its newly redesigned S-Class with a springy performance by a dozen bungee-suspended acrobats and drummers. As for the car, itâ€s a huge leap forward for automotive safety in general and for Mercedes in particular. It combines all the highest-tech safety features that Mercedes has developed in recent years, including a newly enhanced Pre-Safe system that automatically tightens seatbelts just before a collision, closes the sunroof and side-windows (to support airbags), and repositions the seats for better protection [see Whatâ€s New, October]. Lots of other brand-new technological goodies are stuffed in this enlarged Merc-and it looks great, too.

Tiny-car manufacturer Smart (owned by giant-car manufacturer Mercedes-Benz) unveiled its concept for a snappy little micro-hybrid, called the Crosstown. Looking like a toy version of a Jeep, the Crosstown boasts a stowaway windscreen-presumably for people who like the wind in their face as much as in their hair-a high-concept interior, and a hybrid engine that should jack fuel efficiency into the stratosphere. Inside info says that Smart, which earlier this year abandoned plans to bring its lineup to the U.S., is now reconsidering that decision.

Behold the Zo, another great concept car from French manufacturer Renault. This three-seater (2 + 1) has a glass roof that folds upward to allow the rear-seat passenger easier access, and it provides a way to easily load bags into the rear storage without opening the trunk. LED lights embedded in the glass provide a unique visual effect at night.

Czechoslovakian automaker Skoda wants to help you find the mythical snowman, which is almost as scary as the amazon they hired to pose with this car.

Toyotaâ€s European design studio, ED2, created this infinitely versatile four-passenger city car. Multi-hinge doors open waaaay out, seats can be reconfigured in a variety of patterns, and an LCD screen extends the width of the dashboard.