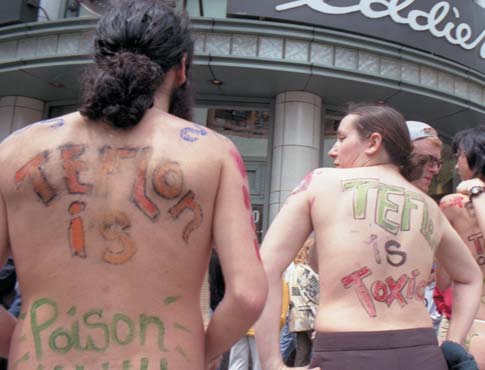 A group of near-naked protesters demonstrated in front of Chicago’s flagship Eddie Bauer store on a chilly Saturday afternoon this May. The target of their ire was not high prices or sweatshop labor but rather a new and, in their opinion, terribly insidious force invading clothing stores across the country: nanotechnology.

Specifically, the members of the group THONG (that’s Topless Humans Organized for Natural Genetics) were very upset about Eddie Bauer’s Nano-Tex line of shirts and khakis, which employ a water- and stain-resistant material made by the Nano-Tex company in Emeryville, California. You’re probably familiar with Nano-Tex’s products. Its fabric is also used in clothing sold in stores as varied as Nordstrom, Old Navy and the Bass Pro Shops. The pitch of Nano-Tex is simple: Using nano-technology, the makers have engineered cheap, comfortable, ketchup- and red- wine-thwarting fiber.

But this widespread use and casual acceptance of novel technology is exactly the problem, according to the members of THONG. In a statement posted on the blog NanoBot, THONG member Kiki Walters says:

We’re out here naked so people can SEE THE PROBLEM, nanotech is such a radical and unpredictable new technology, like biotech, that it takes something highly visible, like a naked body, to get people to focus on the need to stop corporations from using humans as guinea pigs for new, untested, and unstable new technologies!

Let’s set aside the question of whether THONG’s basic argument has merit. More interesting is whether the argument applies in this case at all–whether Eddie Bauer is guilty of shilling nanotech-laced laundry.
Nanotechnology is generally considered to be the manipulation of materials on an atomic or molecular scale, especially to build tiny devices. Build a miniature robot out of individual silicon atoms, and that’s clearly nanotechnology. But the Nano-Tex pants at issue work because the fibers have been treated with chemicals, called hydrophobic monomers, that repel water. The treatment is inarguably an advance over decades-old Teflon-based laminated coatings (and Nano-Tex has 17 patents to prove it), but skeptical folks might just call this chemistry, not nanotechnology.

We’re not going to lament here the loss of the precise meaning of the word “nanotechnology” to savvy marketing. Instead we offer unsolicited advice to reflexive opponents of new technology: There are many recent technological advancements whose applications demand careful consideration and thoughtful debate. Before you strip down to your skivvies in earnest protest, please, try to make sure that the thing you’re protesting has something to do with the thing you’re protesting.