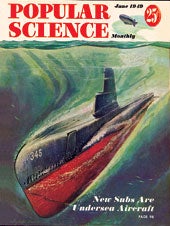 “Now we are getting nearer to true submarines,” PopSci proclaimed in June 1949 of the Navy’s newly revamped U.S.S. TUSK, “not just buttoned-up surface ships that can dunk for a few hours.” The TUSK, first commissioned as a torpedo boat in 1946, reemerged as a deadly spy sub capable of remaining in the deep for weeks, thanks to a snorkel that allowed its diesel engines to run underwater while its upgraded batteries recharged. This technology and a sleek aircraft-inspired design improved the sub’s speed from 10 knots to 15 knots. For the next two decades, the TUSK patrolled the Mediterranean Sea, eavesdropping on Eastern Bloc communications. Today the 60-year-old vessel still operates as a training ship, a living ancestor of the new generation of spy subs equipped with docks for unmanned submersibles and (nearly) silent propulsion.

WARPLANE SCRAP TURNED THREE-WHEELER
The fuel tank of a retired World War II fighter plane served as the body of this unique three-wheeled “motorcycle,” which zipped along at 45 mph and could roam up to 114 miles on two gallons of gas. Surprisingly, you can still build your own–kits sell today for $1,000.

MILK: IT DOES THE RESEARCH GOOD
By milking some 10,000 mice over a 12-year period, researchers isolated the virus that causes breast cancer in the rodents. Recent research now suggests that a similar virus may be linked to most breast cancers in humans.

MACHINE TRUMPS UMP
“There would be no arguing with the umpire with this foul ball indicator,” we wrote. When a baseball struck rods hanging on either side of the foul pole, a light flashed green for fair or red for foul. The invention quickly struck out: It blocked the crowd’s view of the field.