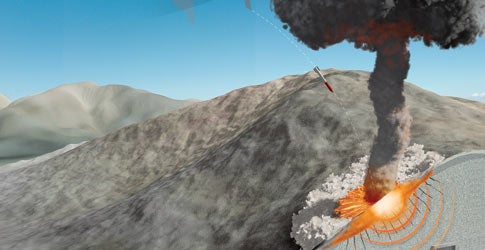 According to the U.S. Department of Defense, hundreds of
underground bunkers in enemy territories serve as weapons silos, command
centers and safe havens for rogue leaders. Drilled several hundred feet or deeper into the ground, many of the hideouts are far beyond the reach of conventional weapons. The Pentagon’s solution: Build a super-slim bomb called a Robust Nuclear Earth Penetrator (RNEP) capable of piercing 20 feet of solid rock and unleashing shock waves on par with a magnitude-7 earthquake.

This fall Congress will decide whether to approve $8.5 million to complete a
feasibility study of the RNEP. But a recent report from the National Academy of
Sciences, a government-funded scientific advisory group, threatens to strike the weapon dead. Issued in May, the 150-page report concludes that the â€bunker busterâ€ would fare better than conventional weapons but may leave many targets unscathed and could result in more than one million civilian casualties.

On all counts, an earth-tunneling bomb is a tall order. The sole nuclear bunker buster in the U.S. arsenal, the 300-kiloton B61, can’t penetrate rock. According to the NAS, to strike deeply buried targets in rocky terrain would require a one-megaton bomb or stronger–one that is up to 80 times as potent as the Hiroshima bomb. What’s more, the RNEP would need to burrow thousands of feet into the ground to contain fallout from the blast.

Here, one scenario envisioned by the NAS.

Nuking a bunker, in four steps
1. A B-2 bomber flying at an altitude of 40,000 feet drops a modified B83 nuclear weapon carrying a 1.2-megaton warhead. It travels 2,000 feet per second toward its ground target.

2. Assuming the soil is composed of granite, the nuke will penetrate to a depth of 20 feet within 100 milliseconds. Radar sensors on the warhead detonate the nuke once it has plowed to its target depth, releasing the energy of more than a million tons of TNT.

3. The blast creates a 1,200-foot-wide crater and sends a shock wave traveling 1,116 feet per second through the ground. The wave will destroy everything down to 1,000 feet. Any bunkers deeper than that could survive the blast.

4. The National Academy of Sciences estimates that the explosion will shoot some 300,000 tons of radioactive debris up to 15 miles into the air. The total number of casualties will vary but could exceed one million, depending on weather, wind velocity and the blast’s proximity to towns and cities.