January 1943: The Fight for Our Fleet

When a former Russian major attacked the combat utility of Americaâ€™s aircraft, PopSciâ€™s radar homed in on the debate 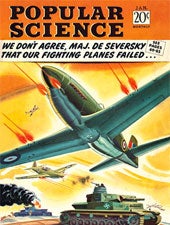 The Fight for Our Fleet

In a heated wartime editorial, PopSci rebutted highly publicized claims that U.S. planes were inferior in speed, range and armament to enemy fighters–claims made by Major Alexander de Seversky, a WWI Russian pilot turned U.S. aircraft manufacturer. “It would be an insult to the dictionary to designate as ‘military’ craft so deficient in the basic qualities necessary for combat,” he wrote in his 1942 book Victory through Air Power. We argued that each plane in the U.S. fleet–from the tank-busting Mustang to the boat-sinking Mitchell–was designed for a specific task. With the Air Force’s standard-issue Warhawks boasting three enemy kills for each loss, fighter planes emerged as a dominant force in warfare, a trend that has continued in every subsequent war. But the arrival of unmanned combat aircraft may bring the age of the fighters to an end

THE BEAUTY-SAVING MASKThis shield, we wrote, protected the eyes, throat and lungs from factory hazards and could act as a “safeguard against disfigurement” for the increased female workforce
during World War II.

DUCK AND COVER YOUR EARSLouder than a modern jet, the car-size Chrysler-Bell Victory Siren used a new air-pressurized sound system with a 140hp engine to signal air raids. The “ear-shattering roar” could alert residents within 50 miles of New York City.

THE QUICKER PICKER-UPPERThe first reusable paper towel could clean up spill after spill without ripping, thanks to a “secret chemical” (what it was, we didn’t say) that tightly fused individual pulp fibers. The paper was widely used in hospitals to free up cloth and burlap bags needed for the war.