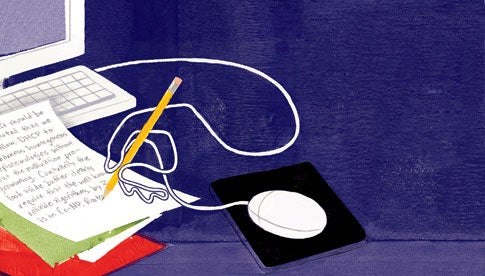 A scientific treatise, written entirely by a computer, was accepted to a professional conference.

E-mail spam offering lower mortgage rates and prescription-free Cialis regularly clogs up our inboxes, but scientists and graduate students also receive e-solicitation of a different kind: calls for paper submissions to research conferences. One conference’s constant entreaties for papers–and the registration fees required to submit them–led three grad students to suspect that the hard-sell approach of the conference organizers would result in relaxed academic standards. To test their theory, they submitted two fake research papers. But the students didn’t fake
the papers themselves–they designed software to do it for them.

In early February, Jeremy Stribling, Dan Aguayo and Max Krohn, all students in the computer-science Ph.D.
program at MIT, constructed a paper-generating computer program that they dubbed SCIgen. For two weeks, they scribbled hundreds of sentences, any of which could independently appear in a scientific journal article. The group then excised nouns, verbs and adjectives from those sentences before entering the truncated phrases into their computer program. SCIgen not only arbitrarily assigns scientific (or scientific-sounding) words from a database to the blank spaces, it also assembles every sentence in a random order. The result is nothing so brilliant and amusing as an incoherently structured but readable paper generated in less than 10 seconds.

The students submitted two SCIgen-spawned papers and the registration fee to the ninth annual Florida-based World Multi-Conference on Systemics, Cybernetics and Informatics (WMSCI). They targeted WMSCI specifically because the conference’s incessant e-mails addressing them as “Dear Doctor” appeared to be essentially business solicitations, in which one paid an obligatory fee to help get a research paper published. For each SCIgen paper accepted to the conference, the students would be out $390. And because WMSCI asks for submissions in topics covering everything under the sun–and accepted 2,904 papers in 2004–the students had a hunch that their 390 bucks would be but a small drop in an ocean of lucre.

When WMSCI accepted the paper –dubbed “Rooter: A Methodology
for the Typical Unification of Access Points and Redundancy”–the trio announced its success online and
posted a PDF of the paper. The introduction begins:

Many scholars would agree that, had it not been for active networks, the simulation of Lamport clocks might never have occurred. The notion that end-users synchronize with the investigation of Markov models is rarely out-dated. A theoretical grand challenge in theory is the important unification of virtual machines and real-time theory.

The report continues through five more sections of text accompanied by inexplicable diagrams and charts.

In response to the posting, the students received hundreds of e-mails from people around the world. Some commended their efforts to expose the conference’s relaxed standards, but most just commented on “how hard they laughed,” Jeremy Stribling recalls. The pranksters quickly lobbied the Web community to help them attend the conference, eventually accumulating more than $2,400. They planned
to improvise a speech–more of a rant–and incorporate never-before-seen diagrams projected behind them. “We would have gone up there and just winged it,” Stribling says.

As word spread, the joke publicly exposed the profit-generating intentions of WMSCI, reigniting a debate on academic integrity. When WMSCI got wind of the prank, however, the students received notification of the paper’s rejection, along with a refund.

Although Stribling is disappointed that “Rooter” was ousted from the
conference, he says it’s time for him to get back to his real research–making more efficient information-sharing networks. The students will probably return the the donation money. But with WMSCI’s big shindig later this month, Stribling, Krohn and Aguayo wonder if a bit of conference-crashing in the Sunshine State may be in order after all.